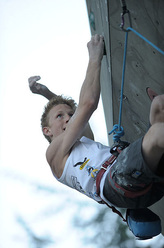 Jakob Schubert from Austria has repeated Chris Sharma's Papichulo 9a+ at Oliana and on-sighted Aitzol 8c at Margalef. Gabriele Moroni has carried out the first repeat of Coup de Grace 9a by Dave Graham in the Canton Ticino, Switzerland.

While the bookmakers have closed the bets for the colour of the Queen's hat this weekend at William and Kate's wedding (these English are crazy!), the bets are on for who might win the World Championship in Arco this July.

Jakob Schubert from Austria certainly stands an excellent chance, and at present he is in Spain where he managed his first 9a+ (Papichulo 9a+ at Oliana) and also his first 8c on-sight, Aitzol at Margalef. But it isn't only his form on rock which is promising: last year the 21-year-old won silver in the World Cup Lead and a few days ago in the first stage of the Bouldering World Cup in Milan he finished second, demonstrating an impressive improvement and ability to perform at the highest standards in various disciplines

Another climber who always impresses, hopefully at Arco, too, is the Italian Gabriele Moroni who has just carried out the first repeat of Coup du Grace in Switzerland. This super-route in Val Bavona in the Ticino had been dreamt of and then freed by American Dave Graham in November 2005 and Moroni confirmed the 9a grade but above all he confirmed its beauty: "Probably the best extreme granite route in the world!". In Milan he had produced a dream-performance for ages (7 consecutive tops with 6 FLASH, then one zone on attempt #1 and he messed up the final problem in the Semi-final) and its clear that all eyes, in 78 days at the World Championship in Arco, will also be on him.