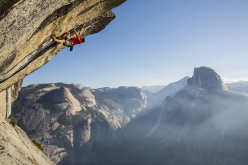 In autumn 2011 American climber Alex Honnold made a daring solo ascent of an overhanging, glaringly beautiful crack up at Glacier Point, Yosemite. So beautiful in fact that the crack was dubbed Heaven by the man who first climbed the route, Ron Kauk, in the 90's. Graded 5.12d/7c, with only 18 moves it certainly "packs a punch" and it's so difficult to resist that Dean Potter first soloed it back in 2005.

This autumn Heaven was soloed for the third time, once again by Alex Honnold. The pretext was for the website platform Squarespace and, unsurprisingly, the footage racked up more than 90,000 views in less than a fortnight. Now the video has been released again, this time tapered specifically with climbers in mind, with all the information you could possibly want about the route and about Honnold's approach to his climbing and soloing. The video is directed by Jimmy Chin - a certain guarantee for the highest quality photos and film. To find out more from behind the scenes check out Jimmy Chin's blog.