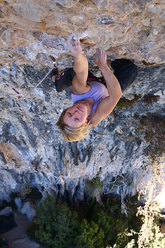 Aleksandra Taistra and Geminis 8b+

Alexandra Taistra from Poland has made a swift ascent of Geminis at Rodellar which, by general consensus, seems to settling down from 8c to the 8b+ mark. Taistra spent the first part of her holidays on-sighting over 100 routes up to 7c+, then concentrated efforts on the massive stamina route in Gran Boveda.

The route, unsurprisingly is proving to be highly popular: New Zealand's top woman climber Mayan Smith-Gobat sent the line just a few days ago, while in November Eva López from Spain returned to her previous form and, finding a different method through the crux, redpointed the classic at what she believes to be 8b/8b+. Time will tell.

Taistra is no newcomer to hard routes: in April 2007 she travelled to Italy where she sent "Die Hard" at Ferentillo, her third 8c after "Power Play" in 2004 and "Nie Dla Psa Kielbasa" in 2005 at Pochylec, Poland.