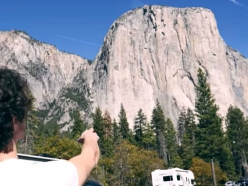 PORTFOLIO / gallery Portfolio: Adam Ondra on the road to the Salathé Wall in Yosemite / VBlog #4

Czech climber Adam Ondra on the road to the Salathé Wall up El Capitan in Yosemite, USA, is the theme of the fourth episode of Ondra’s fourth VBlog

Adam Ondra's video blog documenting his Americas climbing trip is now concentrating on the main objective of the Yosemite trip: the Salathé Wall on El Capitan. As reported, Ondra had attracted to climb this monumental big wall on-sight, belayed by Nicolas Favresse. Here is how this almost impossible adventure started.

VBlog by Adam Ondra - Climbing the Americas
#1: Arrival at Yosemite and flash ascent of legendary Midnight Lightning, freed in 1978 by Ron Kauk and a strong contender for being the most famous boulder problem in the world. Watch the video
#2: The Book of Hate in Yosemite, freed by Randy Leavitt in 1999. Watch the video
#3: the boulder problem Dominated (V13/8B) in Yosemite, climbed by Chris Sharma in 2002 and an extension to Dominator, first climbed by Jerry Moffat in 1993, as well as repeats of Thriller 7C+ and King Cobra 7B+. Watch the video