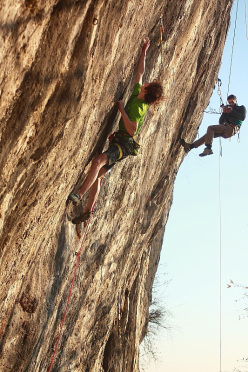 Adam Ondra making the first ascent of Nove G, 9a at Gemona
Photo by Luciano Regattin

Adam Ondra, new 9a at Gemona in Italy

Adam Ondra has made the first ascent of Nove G, a 9a at Gemona in the Friuli region of Northern Italy.

Last weekend Adam Ondra enjoyed a fruitful visit to Italy's Gemona where he was invited as the testimonial of the event Find Your Way 2013. On Saturday afternoon at the local Gemona winter crag Ondra freed an old project bolted by Luciano "Chen" Cimenti and now graded 9a. The name is interesting: Nove G, or Nine G, uttered as a joke years ago when the route was first bolted and seemed light years away and absolutely impossible. Ondra reckons it's a "difficult 9a". Before his evening lecture Ondra ended the day by attempting Effetti Colaterali but he fell, twice. It's worth noting that this is a tough 8c, that it was already dark and that Ondra was climbing with a headtorch...

After Saturdy night's enjoyable lecture Sunday continued in an unexpected manner: to everyone's delight Adam climbed at Raveo Bassa, a crag where the most difficult routes are no harder than 7a... And to conclude his Carnia climb, at Villanova Ondra onsighted an 8b before dabbling on a project a giving it two attempts. Fortunately he failed to free it, no doubt he'll be back sooner or later!