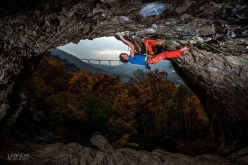 On 25/03/2015 Adam Ondra made the first ascent of Vicious Circle 9a+/b at Misja Pec, the hardest sports climb in Slovenia.

Last Friday at Mišja peč in Slovenia Adam Ondra managed to make ends meet on Vicious Circle, a sports climb for which he suggests the grade 9a+/b, making it the most difficult in the country. Described as being "short and intense", the route is a connection of two established 8c+: after setting off to the left of Za staro kolo in majhnega psa from a bolt he placed last spring, the line traverses right and leads into the upper section of Sanjski par.

With Friday’s first ascent the Czech climber has now upped the ante, set by his fellow countryman Tomáš Mrázek in 2009 with his first ascent of Xaxid Hostel 9a+ on the same limestone walls.

Ondra’s relationship with this crag a stone’s throw from the city of Trieste and the Italian border goes back a long way, for it was here that he climbed his first 9a, a decade ago at a mere 13 years of age.