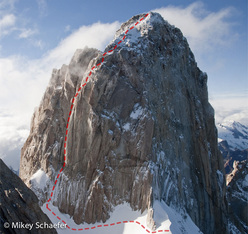 Patagonia continues to be a hotbed for climbing action and this time the news comes directly from Cerro Fitz Roy itself as this has recently been climbed by Mikey Schaefer and Kate Rutherford via their new Washington Route.

The two American alpinists opted to go as light as possible - read no rain gear nor sleeping bag - and this slowed them down significantly on the long approach up the Brecha: after climbing through the rain and melting glacier they first dried their gear, then made a makeshift bivy at the base of the California route when it became clear that the climb would take much longer than planned.

They started up the main difficulties a few hundred meters east of the California route on 09/02/2011, with Rutherford taking over most of the leading. Progress was slow initially due to iced cracks, but these gave way to sustained clean cracks up the obvious left-facing corner system. Ten pitches which were climbed rapidly and they then veered right up another two steep pitches before simul-climbing up 4th class terrain to finally summit just before 11pm. After another cold bivy on the top they then descended safely the next day via the Franco-Argentine route.

The Washington Route is the third new climb in Patagonia for Schaefer after his recent Jardines Japoneses together with Colin Haley and Jens Holsten on Aguja Mermoz and Hard Sayin not Knowing (400m 6a A2 75°) up the E Face of Guillaumet together with Kate Rutherford in January 2009.

For a full report and photos check out mikeylikesrocks.com