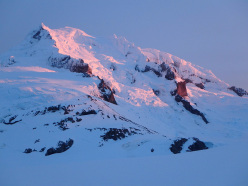 Volcan Aguiler and the route Concierto de rimayas. The first ascent of the mountain was carried out on 29 August 2014 by Camilo Rada, Natalia Martinez, Ines Dusaillant, Viviana Callahan and Evan Miles
Photo by Uncharted archive 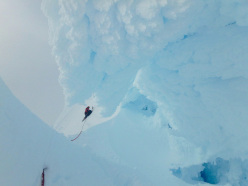 Volcan Aguilera: almost devoured by a monster of ice
Photo by Natalia Martínez

Volcan Aguilera, first ascent in Patagonia by the Uncharted expedition

The Uncharted expedition comprised of Camilo Rada, Natalia Martinez, Ines Dusaillant, Viviana Callahan and Evan Miles has made the first ascent of Volcan Aguilera (2480m) on the South Patagonian Icefield. Furthermore, during the return across the Hielos Continentales the team ascended four other previously unclimbed peaks. The report by Camilo Rada.

In their third Uncharted expedition, Camilo Rada (Chile) and Natalia Martinez (Argentina) teamed up with Ines Dusaillant (Chile), Viviana Callahan (Chile), and Evan Miles (USA) to accomplish the first ascent of the remote Volcan Aguilera, and managed first ascents of 4 other peaks during a 19-day crossing of the South Patagonian Icefield in the 2014 austral winter. The team’s primary objective, Volcan Aguilera (2480m) stands solitary 1500m prominent over the Icefield due west of the famed Falla Reichert, and was the last major Andean volcano without an ascent.

Although located only 10km from ocean access via Fiordo Peel, the approach’s dense vegetation and the region’s fickle weather had repulsed 6 previous month-long expeditions since 1986 (see historic background bellow), allowing only one team to even establish a camp at the mountain’s base. Taking note, the Uncharted team instead employed a counter-intuitive approach, starting from the Brazo Spegazzini of Lago Agrentino (Argentina) to traverse 47 km of icefield and opening new passes to arrive at the mountain’s untried north side. This entrance to the ice field was previously untried and proved to be a quick access to a wide area of poorly explored terrain. In a single 25-hour round-trip summit push, the team was able to negotiate the mountain’s towering seracs, gaping bergschrunds, and ice mushrooms to attain the summit at dusk on August 29th. Their route, Concierto de Rimayas, ascends the volcano’s north ridge before crossing onto the heavily-glaciated northwest face, and is named for the complex navigation required to find a path through the many fissures, passing around, over, and through at least 5 bergschrunds in variable weather including sun, snow, freezing rain, and wind.

Rest included exploration of volcanic formations on the mountain’s NE flank and a descent off the ice to vegetation while scoping future access routes from the nearby fjord. Then, taking advantage of extra rations and fantastic weather on their return journey, the team subsequently climbed 2 unnamed peaks (2420m, 2440m), Cerro Spegazzini’s East Peak (2290m), and Cerro Esperanza (2520m), all believed to be previously unclimbed.

The Uncharted project seeks to preserve exploration heritage and clarify errors and confusion in the exploratory history and maps of Patagonia’s mountain ranges, conducting extensive historical research and contacting members and family of prior expeditions before producing a high-quality topographic map highlighting the primary routes and correct peak names. Prior investigations and expeditions to the Cordillera de Darwin (2013) and the Cordillera de Sarmiento (2012) each resulted in significant ascents and corrections to geographic ambiguities. The Aguilera expedition has also identified several significant map errors for the seldom-visited region, and the team expects to clarify this confusion in their map after finishing their literature review.

Short background
First named by famed Italian explorer Alberto de Agostini in 1933, the peak was next visited by Bill Tilman himself and described in his 1957 book "Mischief in Patagonia".
Inspired by Tilman’s account, Matthew Hickman led the Anglo-Chilean Patagonian Expedition of 1985, which established the volcanic geology of the massif but was unable to carry out its intended field mapping activities.
The next attempt was done by a Japanese-Chilean team leaded by Eiho Otani in 1989.
In 1993, the expedition by Brit James "skip" Novak resulted in little gained knowledge, but whetted the appetite of Dr. David Hillebrandt, who made attempts on the peak in 2003, 2004, and 2005. These expeditions, though successful in determining an approach and possible ascent route via the South Ridge, were nonetheless hampered by the limited-detail maps of the region and the tenacious weather. The highest point attained on the massif is approximately 1291m according to Dr Hillebrandt’s GPS.
More recently, in 2013 a last attempt was made by a Chilean team leaded by Abdo Fernández, following a similar approach than the last expedition by Dr. Hillebrandt.