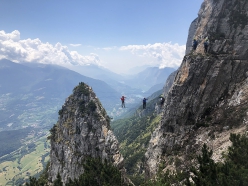 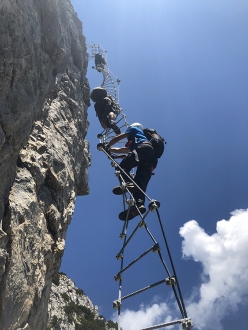 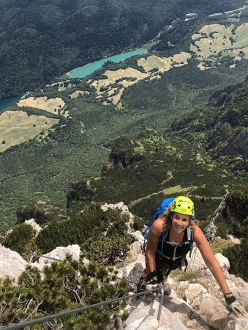 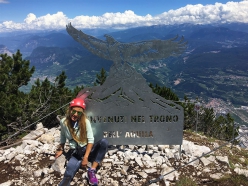 The description of Via ferrata delle Aquile up Cima Roda della Paganella (2124m) in Trentino, Italy, with a splendid view onto Val d’Adige, the Brenta Dolomites and Lake Garda. By Mauro Girardi, MMove mountain guide.

Exciting, exposed, unforgettable... Via ferrata delle Aquile up the imposing east face of Cima Roda della Paganella in Trentino was inaugurated a few years ago and provides extraordinary vistats across of the Adige Valley, the Brenta Dolomites and even down to Lake Garda.

Dedicated to Carlo Alberto Banal, the via ferrata is extremely exposed and equipped with steel cable and metal brackets. Two hanging bridges are located on the second half of the ferrata, and towards the end there are two alternatives that lead to the “Eagles’s Throne”: the first leads via a classic metal cable fixed to the rock, the second is more challenging and characterized by a spiral, 360° ladder.

This is a fascinating and adrenaline-charged via ferrata due to constant exposure. Suitable for experienced hikers without fear for heights and in good physical shape.