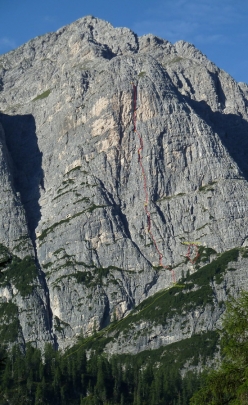 In 2002 Paolo Da Pozzo and Walter Bachmann established an interesting route up the east face of the North-East summit of Cima Marcoira (or Malquoira, 2422m), a lone offshoot of Mt. Sorapis.

The face is clearly visible from the bridge at Rudavoi, the viaduct located close to Passo Tre Croci that replaced the temporary bridge after the original one had been destroyed by a flood in September 1997.

The Da Pozzo - Bachmann route up Cima Marcoira has remained unknown to most since the first ascentionists, two young mountain guides from Cortina, didn’t spread the news about their climb. I repeated it a couple of times 2003 and 2004 and in my opinion this is an interesting line, well worth repeating.

Although the route is protected by bolts, it isn’t a sport climb: the pro is runout at times and I recommend you take a set of small / medium friends.

It can be split into two sections, a first somewhat easier section with discontinuous difficulties, and a second decidedly more challenging section with sustained climbing.

The rock quality is good, but nevertheless you need to pay attention and future ascentionsts will help clean the route further. The Da Pozzo - Bachmann climbs to the right of a route first ascended by S. Torso, with which it shares the last pitch.

The setting is both magnificent and lonely with spectacular views of the surrounding mountains, in particular from the summit: from up there you can admire Cristallo, Cadini Lake Misurina, Tre Cime di Lavaredo, Marmarole, Popena and Sorapìs. And the descent, first down alpine meadows and then across scree slopes before plunging through the forest, adds a further touch of magic to this Dolomite outing.