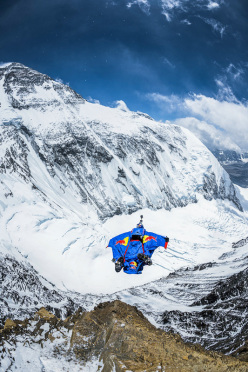 Valery Rozov BASE jumps from 7220m off Everest

On 5 May 2013 Russian BASE jumper Valery Rozov leapt off the North Face of Everest from a record height of 7220m.

Yet another BASE jump by Russia's Valery Rozov, but this time his "leap" is even bigger than all the rest. Thinking about it, it'll be difficult to jump any higher than this, for on 5 May the 48-year-old "dived" off the North Face of Everest from an altitude of 7220m!

The Everest leap is a project which came to fruition at the start of May after more than 2 years of preparations - his 2012 jump off Shivling was nothing but a trial run therefore - and the recent jump had to handle all the extreme conditions that the highest mountain in the world holds in store: highest altitudes, thin air, rigid temperatures and extremely strong winds.

After a very fast acclimatisation period Rozov spent 4 days ascending with the help of his team and 4 Sherpa to make use of the forecasted weather window. The launch point was located circa 200m above the North Col and at 14:30 local time on 5 May the Russian leapt into the void, flying with his special wing suit, reaching a maximum speed of circa 200 km/h before opening his parachute and landing on the Rongbuk glacier at 5,950m almost a minute after having set off.

For the record, Rozov's leap isn't the highest flight ever off a mountain; as early as 1988 Jean-Marc Boivin from France made the first-ever paraglider flight off Everest, setting off circa 20m below the summit and flying for roughly 12 minutes before landing at Camp II at 5900m. But Rozov's latest leap, carried out during the month which celebrates the 60th anniversary of the first ascent, is undoubtedly the highest BASE jump in the world. A record that will prove difficult to beat!