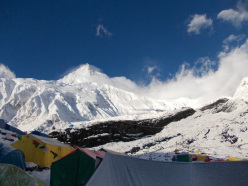 Rescue operations are still ongoing on Manaslu following the avalanche which struck Camps 3 and 2 on Saturday night. The bodies of six alpinists are said to have been recovered, while five alpinists have been evacuated off the mountain. The final death toll is still unclear, with conflicting reports mentioning between 9 and 13 dead. The number of missing mountaineers is still uncertain, too.

The news reports and, in particular, the precise outcome of the Manaslu disaster are still entirely provisional. This is completely normal for the Himalaya. Because although the Fishtail Air helicopters reached Base Camp yesterday, ground rescue support still needs to get there. And as everyone knows, often even those at Base Camp - more than 200 climbers were said to be at Manalsu this autumn - cannot immediately help rescue operations due to route conditions and the time needed to ascend the peak. It is worth remembering that the avalanche struck Camps 3 and 2 at almost 7000m.

So the final count is still unclear. Although some mention 13 dead, the official Nepalese figures indicate 11 victims, while others mention 9 deaths. What is certain is that the number of missing is still provisional. The recent helicopter operations, which included Silvio Mondinelli and Sherpa Nima, are said to have transported 6 bodies down to Base Camp but above all they are said to have rescued 5 stranded mountaineers. According to reports, all mountaineers should by now have descended off the mountain. What is unclear though is how many missing climbers are still buried in the avalanche which struck Camp 3 at 6800m and Camp 2.

What is certain is that one of the victims is Alberto Magliano, the experienced Italian mountaineer who climbed with passion and intelligence. 66-year-old Magliano was the second Italian (after Reinhold Messner) to have climbed the Seven Summits and his relationship with mountaineering and the mountains is certainly one worth recounting. Another certainty - and this is the "positive" note in this terrible tragedy - is that Magliano's expedition companions Silvio Mondinelli and Cristian Gobbi miraculously survived, just like all those belonging to the Italian Mountain Kingdom expedition who were in Camp 2 at the time the avalanche struck. Cesare Cesa Bianchi, Luca Macchetto, Silvano Spinelli, Guido Spinelli, Mario Monaco, Eloise Barbieri, Roberta Vittorangeli and Ivan Bianchi are all well and had already reached Base Camp yesterday where they joined up with the other Italian mountaineer, Marco Confortola.