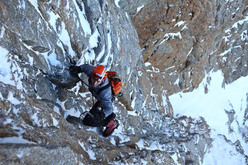 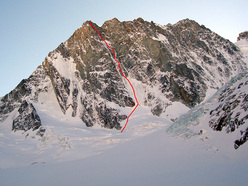 The Colton Macintyre on the Grandes Jorasses, first climbed by Nick Colton and Alex MacIntyre in 1976.
Photo by Steck archive

On 28 December 2008 Ueli Steck from Switzerland climbed the classic Colton - Macintyre route up the North Face of the Grandes Jorasses in in a mere 2 hours and 21 minutes, setting a new record for the wall and climbing all three great North Faces of the Alps in staggering times: Eiger, Matterhorn and Grandes Jorasses.

Once climbing the legendary three great North Faces of the Alps used to be every climber's dream. In the 1980's climbing them all, one after the other in rapid succession, became a game for extraordinary alpinist racers. As of late, these great walls which enshrine the history of alpinism are home to vertical sprinters. Or rather, to Ueli Steck! After his 2008 record speed ascents of the Eiger and the Matterhorn, the 32 year old Swiss mountaineer has now climbed the 1100m super classic Colton - Macintyre up the North Face of the Grandes Jorasses (Mont Blanc massif) in a mere 2 hours 21 minutes.

To perform this extraordinary achievement Steck reached the base of the 1976 route the day before to study the route which, importantly, he had never climbed previously. After a night spent in a tent below the wall he set off the next morning with the face in perfect winter conditions (-16°C) and as usual with only minimal equipment for his solo: 50m of 5mm Dyneema rope, 2 ice screws, 4 carabiners, a belay device and 2 pitons. The rope, it should be stated, remained stowed in his rucksack...

Steck encountered perfect ice conditions, climbing the McIntyre Route up the first half of the wall to then climb two steep ice pitches of the Alexis route (Patrick Gabarrou & Robert Benoit, 1993) before returning back onto the rocky mixed terrain up the original line to the Pointe Walker summit at 4208m. 1100m in a mere 2 hours and 21 minutes... truly impressive!

Ueli Steck has now climbed the big three North Faces in the Alps in times which the adjective fast seems somewhat of an understatement: in February 2008 he climbed the Eiger via the classic Heckmair Route in 2:47:33 (and in doing so he beat his previous best), while in March he climbed the Matterhorn via the demanding Bonatti route in 25 hours.... nothing if you consider the difficulty of the route. Ueli Steck has laid down a path therfore. Let's see how many will follow.