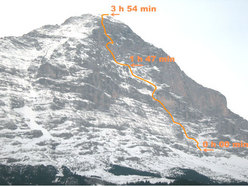 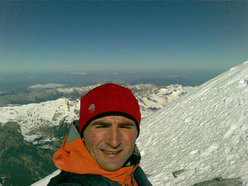 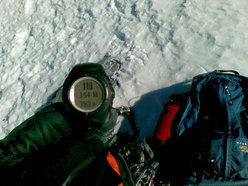 On 21 February Ueli Steck from Switzerland climbed the North Face of the Eiger in a record time of 3.54.

On 21 February Ueli Steck climbed the North Face of the Eiger via the route climbed by the first ascentionists Heckmaier, VÃ¶rg, Kasparek and Harrer in an incredible 3 hours 54 minutes. The Swiss climber had ascended the route twice previously, the first ten years ago and the second a few days prior to this speed ascent together with his girlfriend Nicole.

During this ascent Steck realised that conditions in the upper section of the route were simply "super" and that the moment he had been dreaming of had finally come. A dream which had started when the Italian mountain guide Christoph Hainz waltzed up the route, almost by chance, in an impressive 4 hours 30 minutes.

But these ascents never come about by chance: Ueli is currently training hard for his great project, the south Face of Annapurna solo. And the 1800m Eiger North Face seemed like an excellent test, both physically and psychologically.

Check out his interview below, and his detailed ascent report here.


EIGER EXPRESS, interview with Ueli Steck
Ueli you raced up the Eiger's Heckmaier solo and self-belayed only three times...
Yes, three times for 15m. In the Difficult Crack, the Waterfall Chimney and the Quartz Crack. Talking about belaying is relative: I threaded the rope into the belay, then tied in to both ends. The rope was 30m long, so I could climb 15m and risked falling 30m in total. After 15m I untied from one end and then continued upwards. The other end automatically slipped through the belay.

Why this fast ascent on this route?
I've dreamt about this for a long time. I've often asked myself how Christoph Hainz managed to climb the route in just 4.30. I looked at the route carefully recently and checked out the rock sections. This was the only was to improve on Cristoph's time. I'm obviously super happy now.

Talking of super - what are super conditions on the Heckmaier?
Firn and plenty of ice. I travel fast on mixed terrain, thanks to years of dry tooling. This was the first time I was able to "convert" this technique to a large face, and I'm sure that dry tooling will heavily influence mountaineering in the future. After the ice sections it wasn't particularly cold, the rock was dry and I even managed to climb without gloves!

This almost sounds all too simple. But ascents like these don't just spring from nowhere....
No, I waited two years for these conditions. And recently I've carried out specific endurance training for my next expedition, the south Face of Annapurna solo. I hope to complete the route that the French climbers Pierre BÃ©ghin and Christoph Lafaille attempted in 1992.

What does the Eiger mean to you?
The Eiger is, and will always remain, my backyard mountain. I think I'll always return to climb it, just like I think that it continues to be one of the most impressive faces in the Alps.

And what about this route?
This route is an integral part of the history of alpinism. I often imagine how in the '30's they attempted the face. And Heckmair's ascent in 1938 was simply incredible, even how he managed to climb the rock sections... Madness. Today the route is still demanding, and even if the hardest sections are only 5+, they still really make you sweat...