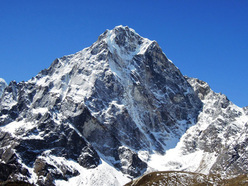 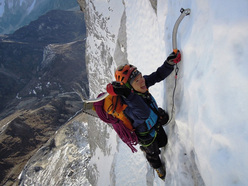 Ueli Steck in the Himalaya

Swiss alpinist Ueli Steck is back in the Himalaya, at present in Shisha Pangma base camp, ready for an attempt up the South Face together with Don Bowie

An exciting new chapter is about to begin in the Himalaya for Ueli Steck, the Swiss alpinist who more than anyone else has specialised in speed solo ascents, proving and pushing the humanly possible when ideal conditions, the right frame of mind and a trained physique all unite to perfection.

Steck has some of the fastest ascents in the Alps to his name, in particular the Matterhorn (1:56, 2009), the Grandes Jorasses (2:21, 2008) and the Eiger (2:47, 2008), but since these times risk paling into insignificance, it might be worth hearing what another class-alpinist, Colin Haley, had to say after his own recent ascent of the classic Heckmair: "Climbing the 1938 route leaves me even more impressed by Ueli Steck's incredibly fast time of 2:47. I think this speed record is amazing, and much more impressive than the current speed record on The Nose. Think about it - a whole bunch of climbers have now climbed The Nose in less than 3 hours, but the second-fastest time on the Eiger is 4 and a half hours (set by Italian Christoph Hainz in 2003)."

So now the "Swiss Machine" is back in the Himalaya, after his extraordinary Khumbu Express in 2005 (Cholatse, Tawoche solo), after Tengkampoche in 2008 together with Simon Anthamatten (which won them the Piolet d'Or) and after Gasherbrum II in 2009. Steck is currently in Shisha Pangma base camp at 5306m, poised for an attempt up the South Face along with America's Don Bowie. The path from Lukla to this 8000er led him via a night at 5300m on Lobuche Peak and the North Face of Cholaste (6440m) together with Freddie Wilkinson. Steck's had previously stated "My vision is taking the fast, light, alpine style to big, really technical faces" and yesterday he concluded "The acclimatisation in the Khumbu valley was perfect. The feeling is really sensational..." Hopfully we'll see some great ascents shortly. In the meantime, if you haven't seen this video of the fastest man in the Alps, enjoy!