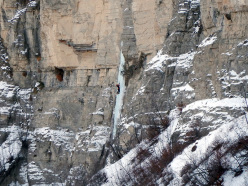 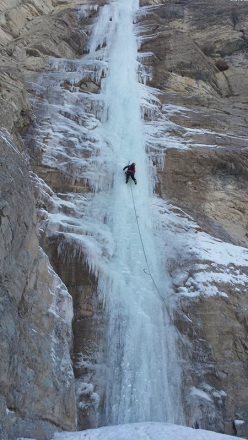 Who knew that one could ice climb in Turkey? ... Not even the Turks!

Erzurum is one of the biggest high altitude plateaus in Anatolia, located at an altitude of almost 2000m. Mountains are everywhere and you first have to descend into the valleys and then ascend again to locate the icefalls. We descend to Usundere at 1000m altitude, and from we were transported by bus or jeep to altitudes between 1800m and 2000m.

Circa sixty people took part in the festival and there were are many foreign participants, Russians, Poles, Romanians, Portuguese, French, Americans, Canadians, China’s Sebastian (is what he likes to be called), Nepal’s Maya Gurung, Spain’s Oscar Cadiach, Turkey’s Tunc Findik, Dogan Palut, and then Cecilia (Buil - ed) and myself. Us girls became the stars of the festival for the Turks!

We opened the eyes of all those farmers who came to see what we were up to, “hanging to the ice!” Unfortunately no woman or girl walked up to the base of the icefalls with the men, but perhaps some children will think differently as of today.

Bayram Çetin, the organizer and manager of the festival, did wonders to organize everything and and everyone, even when our bags failed to arrive at the airport! He drove us personally to help us make the first ascents of two icefalls that will remain in etched in the hearts of the Turks, in particular Anatolia Pillar! A true gift to me and Cecilia!