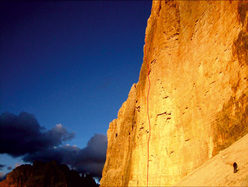 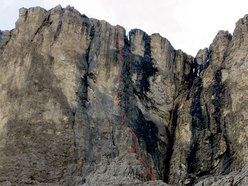 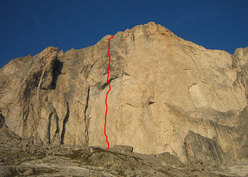 On 17/7 Florian and Martin Riegler carried out a rare repeat of the Via Camillotto Pellesier on the N Face of Cima Grande di Lavaredo (Dolomites).

On 17 July Florian and Martin Riegler carried out a rare repeat of the Via Camilotto Pellesier on the N Face of Cima Grande di Lavaredo (Dolomites). After just a day on the route, the two climbed the 400m 8b line in just under 6 hours, switching leads and without ever falling. First ascend with the use of aid by the Minuzzo brothers in 1967, this route was first climbed free by Mauro Bubu Bole in 2003, while in July 2006 Ines Papert managed the first female ascent.

Florian sent us a brief report about this ascent. It's worth noting though that the Riegler brothers have added two difficult and interesting routes in the Dolomites El Negrito 7c on Piz Ciavazes (20/05/07) and ZwergenkÃ¶nig (King of dwarfs) IX which breaches the enormous roof on the beautiful Roda de Vael (09/09/2006), both now in our database with photos and description.

And if you've got a moment to spare check out Florian's curriculum... impressive to say the least.


Via Camilotto Pellesier, Cima Grande di Lavaredo
by Florian Riegler
My brother Martin tried to convince me to attempt the "Pellesier" on Cima Grande di Lavaredo, and I was immediately enthused. Since we're not professional climbers neither of us wanted to "just" belay the other so we decided to climb switching leads.

On our first dat we climbed the entire route to the summit to check it out. We immediatly managed to free climb some pitches, others needed closer inspection.

After a rest day we redpointed the route; each pitch first go and in less than six hours. On the summit we didn't know what to be more pleased with: Thomas Huber's congratulations or finally being able to take off our climbing shoes..."