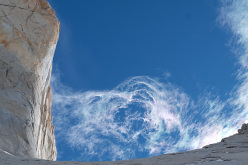 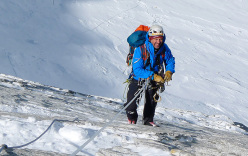 Mike Turner, Jerry Gore, Calum Muskett and Raphael Jochaud have made the first ascent of Wall of Paine up the SE Face of South Tower of Torres del Paine, Patagonia. The four were stopped 100m below the summit due to bad weather.

British climbers Mike Turner, Jerry Gore, Calum Muskett and French cameraman Raphael Jochaud have made the first ascent of Wall of Paine up the SE Face of South Tower of Torres del Paine, Patagonia. After climbing 900m past difficulties up to E3, A3+ a ferocious storm unfortunately prevented the team from standing on the elusive summit, only a 100m of easy mixed climbing away.

According to Patagonian veteran Mike "Twid" Turner, the SE Face the South Tower of Paine "has been one of the most sought after unclimbed faces in the whole of Patagonian region. It is a kilometre wide and high, of compact granite and has no obvious continuous crack systems on its smooth face."

The four alpinists spent circa three weeks climbing the line that initially followed Turner's previous attempt, carried out in 2006 together with Stuart McAleese and called The Good, the Bad and the Ugly! At the time the duo breached the virgin face but were thwarted circa 300m below the summit by a raging storm.

This season Turner returned hoping to set the record straight, but once again Patagonia's infamous weather lived up to its reputation. "Storms raged throughout the duration of the expedition with only 2 days of perfect weather" explained Turner. Surviving, let alone free climbing, proved tough but nevertheless the climbers managed to negotiate the steep rock wall, past plenty of loose difficult expanding pitches on the lower/middle section to then ascend the excellent pink granite above. They used fixed ropes as the +100mph winds made using portaledges impossible, and after reaching the 2006 highpoint the climbers continued, with high hopes of reaching the summit. However, luck was not on their side; a raging storm and raging winds hampered progress and, with time running out, they were forced to retreat circa 100m below the main summit.

Tuner, who has has seven trips to the area and five new routes to his name, stated "It feels a formidable wall to climb. Combine the sheer blankness of the cold exposed South East Face face and the prevailing Patagonian weather and you get one of the hardest Big Walls in the world to ascend. You need luck, weather and perseverance to ‘hang in there’ when the winds start to roar." He concluded "It was a big team effort!"


TOPO: Patagonia, trekking in a magical and mysterious land