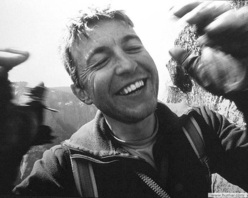 Tomaz Humar's Odyssey on the South Face of Dhaulagiri

On the 3rd of November, after nine days of hard climbing, the Slovenian Tomaz Humar finished his new route up the previously unclimbed South Face of Dhaulagiri, 8167m. This 4000m Face had in the past been described as one of the last great challenges in the Himalaya.

Humar had prepared for his odessy by previously climbing some truly impressive peaks in the Himalaya. His ascent of Ama Dablam brought him worldwide recognition and the coveted Piolet d’or, while the South Face of Nuptse wrought disaster, as his climbing partner Janez Jeglic died tragically during the ascent. More recently he had soloed some of the hardest aid routes in the world, including Reticent Wall on El Capitan, A5.

Humar’s nine day ascent started on the 25th of October. He climbed swiftly up the center of the 4000m South Face up to 7200m, before being forced to traverse rightwards for almost 1000m to reach the Japanese crest. He continued up this to 7800m, where he bivouaked for the eighth time. The next morning he decided against a summit push: another night on the Face may have been deadly, and would almost certainly have had severe consequences on his frostbite.

During his descent he stumbled across the dead body of the unfortunate English Ginette Harrison (she had climbed five 8000m peaks and may have been a contender for one of the first women to climb all 14) who had died the previous week in an avalanche while trying to reach the summit.

Humar had counted on climbing up the initial gullies and channels to swiftly overcome the lower section. Lack of ice and dangerous rock and ice falls forced him abandon this idea and climb up rock instead. He then continued rapidly up snowy slopes to a band of rocks at 7200m which he failed to overcome. He was therefore forced into a long righwards traverse to reach the Japanese crest, which rises up the right-hand side of the South Face. He continued on up to 7800m where he spent his eighth night on the Face. High winds and low temperatures dashed his hopes for a summit bid the following morning. He judged the danger of another night in the death zone as too risky, and so he descended to Advanced Camp at 5600m. His companions who had been on the Normal route on the North Face joined him there, and the next day he was picked up by helicopter.

Humar rates the 3000m as mixed M5 to M7+, up 50° to 90° slopes. It should perhaps be added that none of the teams hoping to reach the summit managed to do so on the day Humar decided to descend. For those who did not follow his ascent we recommend www.humar.com which followed his efforts step by step.

19.02.1999
Tomaz Humar climbs A5 on El Capitan, Yosemite
On the 26th of October 1998, after fifteen days on El Capitan, the 29 year-old Slovenian Tomaz Humar completed Reticent Wall (VI, 5.9, A5 850m). Humar is well-known for his successes in the Himalayas, where in 1997 he ascended Nuptse in alpine style together with Janiz Jeglic, and Ama Dablam in the same style in 1996 with Vanja Furlan (winner of the trophy Piolet d'Or). Interview by Erik Svab photographs by Matej Mejovsek