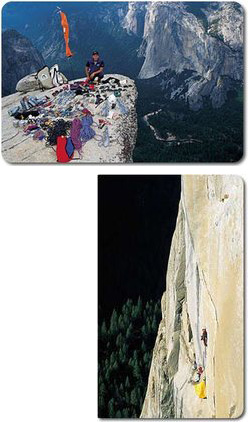 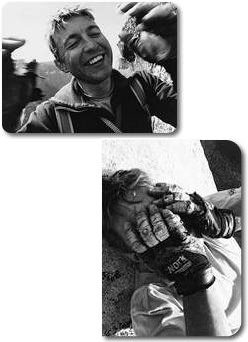 On the 26th of October 1998, after fifteen days on El Capitan, the 29 year-old Slovenian Tomaz Humar completed Reticent Wall (VI, 5.9, A5 850m). Humar is well-known for his successes in the Himalayas, where in 1997 he ascended Nuptse in alpine style together with Janiz Jeglic, and Ama Dablam in the same style in 1996 with Vanja Furlan (winner of the trophy Piolet d'Or). Interview by Erik Svab photographs by Matej Mejovsek

Erik: How hard is Reticent Wall and what is the significance of your solitary ascent of this aid route?
Tomaz: This route was first climbed by Steve Gerberding, Scott Stowe and Lori Reddel over a period of ten days in November 1995. At the time of my ascent it was the hardest on El Cap. But for me the ascent is even more valuable, since I'd never climbed anything on El Cap prior to this. It was in fact my first real Big Wall serious, dangerous, but above all, an adventure.

In my case one really could say 'Veni vidi vinci'. Or even 'from the Himalayas to El Capitan', something which no one has ever done before, as these are two entirely different worlds.

Erik: What difficulties did you face?
Tomaz: I'm used to extreme cold and the objective dangers of the Himalayas. So the adventure on El Cap was something completely new: continuous hard aid climbing on an enormous face. I had already climbed some hard aid routes at home in Slovenia, in the Kamnike Alps, which I'd graded A4-A5. Although some of the pitches are harder than those found on reticent Wall, they're a lot shorter. So this solo is definitely the hardest I've ever done the pitches are 60-65 meters long with potential falls of 130m and the rock is completely different from what I'm used to. After having climbed this new age A5, I can now confirm the grades of my routes in Slovenia.

Another problem I encountered was with the local climbers: no one wanted to help me in any way whatsoever, perhaps because I was there for the first time and nevertheless wanted to climb the route solo. They didn't give me any useful information about the route, perhaps because they didn't think I would succeed. I'm proud of the fact that I'm the first European to repeat this route and I must thank the Canadians who, having climbed the route prior to me, were the only ones who gave me precise info about the route.

After 6 trips out of Europe I can say that I've realised all of objectives. Nowadays, if you want to do something in mountaineering, then you've got to be good at many different things. I'm attracted by all types of climbing, but I'm sure that it's impossible to be good at all at the same time. I'm more convinced than ever that the maximum form of alpinism is solo, because it is here that a person's true ability is put to the test.

In alpinism limits don't exist because the best keep pushing them up, and the Himalayas, where altitude, still continue to be the stage for the biggest performances.

Erik: Why did you decide to climb a route on El Capitan after not even a year since your tragic odyssey on Nuptse and after having suffered frostbite to both your fingers and feet?
Tomaz: I'd already climbed lot's of aid routes in the past. After the latest adventures in the Himalayas and various therapies I've had to accept the loss of some parts of my toes and I only started climbing again in March. Like many times before, and above all in the Himalayas, my psyche proved to be my strongest asset. I'll continue to have problems with my feet, they'll never be the same as before, but I've just got to grit my teeth and get on with life.

Erik: I know that on the route next to you there was a support team which took pictures and filmed your climbing. How did their presence team affect you?
Tomaz: When I solo my routes I always manage to concentrate 100% - otherwise I wouldn't be alive today so the presence of a camerateam didn't affect me at all. Anyhow, for more than half the route I didn't have any visual contact with them at all, I only heard from them via the walkie talkie. The photographer and cameraman were necessary for my future projects.

Erik: Did you use any particular gear for your ascent?
Tomaz: It's interesting to note that for this type of route you don't need many pegs, seeing that most of the climbing is on copperheads and cliffhangers. According to those who have repeated Reticent Wall, there are some new age A2 pitches which are harder than those on the valley's classic A5's (like the well-known 'Lost in America' and 'Zenyatta Mondatta'). I haven't got any experience of other routes in the valley, but I can say that on these A2 pitches there were some 10-15 meter sections which had to be climbed on cliffs.

I climbed the route in 15 days, hauling up 100kg of gear and food. I didn't use all of it, but seeing that I hadn't been given any precise information by the local climbers, I didn't want to risk anything and organised everything myself.

Erik: What's the best way to train for a route like this?
Tomaz: Before crossing the ocean I trained in the Val di Mello, in Italy, where I did the first repeat and first solitary of 'Mama Mia, A4+'. When I met the first ascentionist Thomas Tividar, at that time one of the best aid climbers in the world, he told me that 'Mama Mia' could be A5, given the dangerous nature of the crux belay which is made up of three no.2 copperheads.

In aid climbing nowadays it's the psychological preparation that counts, you've got to be able to reason extremely clearly!

Erik: What are you goals now?
Tomaz: Nothing's definite yet, so I don't want to speak too soon. I can only say that I'm planning an incredible climb in the Himalayas, a climb which I'd like to do alone, or possibly with a small support team.

This'll cost about $100,000 which for me is a vast sum of money. But one should never limit the future.