► News ► Alpinism ► Thalay Sagar, Beats of Freedom and the attempt by Daniele Nardi & Co in the Indian Himalaya
Versione italiana 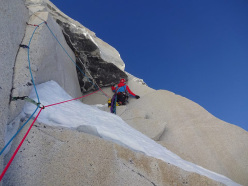 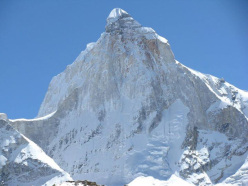 PORTFOLIO / gallery Portfolio: Thalay Sagar, Beats of Freedom and the attempt by Daniele Nardi & Co in the Indian Himalaya

Thalay Sagar, Beats of Freedom and the attempt by Daniele Nardi & Co in the Indian Himalaya

Daniele Nardi tells about the expedition to Thalay Sagar (6904m) in the Indian Himalaya, carried out together with the Spanish mountaineers Alex Txikon, Txus Lizarraga, Adrian Legarra, Ekaitz

The international team had planed to climb a new route up the NW ridge to the right of Harvest Moon, the route climbed in 2004 by Stephan Siegrist, Denis Burdet, Thomas Senf and Ralph Weber. After having followed the Swiss route for 700m to an altitude of 6039m, the team established Camp 2 and then broke off right, along the pillar for another 520m circa. This vertical and at times overhanging granite proved difficult and, after 11 new pitches and having reached the col and normal route at 6450m, the six mountaineers were forced to descend.

This attempt has been called Beats of Freedom and is graded M5/6, A3, WI4+. Even if the summit wasn’t reached, it was nevertheless an important experience for all concerned and Nardi has now posted a series of videos, photos an excepts about the expedition on his Facebook page.