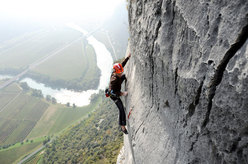 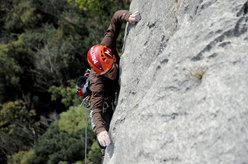 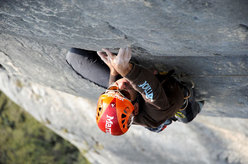 On 16 April 2011 Nicola Tondini managed the second free ascent of "Testa o Croce" (185m, 8b max, 7c obligatory), the route on the Monte Cimo buttress (Val d’Adige) established together with Nicola Sartori in autumn 2009 and which Sartori had freed in April 2010.

When a route grabs you, it doesn't let you go. This is what happened to Nicola Tondini and his "Testa o Croce", his heads or tails which he had established together with Nicola Sartori in 2009 on the Scoglio dei Ciclopi buttress of Monte Cimo, Val d'Adige in Northern Italy. Sartori had then gone on to free the line in a single push in April 2010. "It's a beautiful route" explains Tondini. And also extremely demanding, we add. 185m split into five pitches, with a max difficulty of 8b and obligatory 7c climbing which Tondini assures is "something which you really have to try. The rock is magnificent and varied, from steep overhanging tufas to smooth, balancy slabs, pocketed stamina fests to bouldery bulges." In short, for those who master these sorts of difficulties, fun and commitment are guaranteed.

Bearing all this in mind, it's clear therefore that Tondini still had a score to settle with his route. So after three days of working the line, on 16 April he succeeded in redpointing the line. The temperature was perfect and he was overcome by that joy that all climbers search for. "The feeling you get when freeing a route in a single day is unique" Tondini stated, explaining further "unlike a single pitch at the crag, where you know you can give it all you've got on that one attempt and then who knows how the rest of the day will unfold, on a multi-pitch you've got to constantly climb with maximum concentration, all the time and up all the pitches. The slightest error anywhere along the way can cost you the redpoint. I almost climb in a dream-like state: I disconnect from the rest of the world, enter a small interior desert. Then, when it's all over, I return to "life" with child-like joy, like someone who has won a great prize and wants to share it with everyone."

Special thanks by Nicola Tondini: thanks to Chicco and Enrico who accompanied me on these final attempts and who motivated to do better. A particular thanks to the new staff at King Rock (the biggest climbing wall at Verona): Massimo Ottolini, kinesiologist, who fixed my should in autumn; Paolo Gaspari, trainer, whose useful advide was put to good use; Alberto Gattiboni, director of King Rock Gym, whose warm-up regime for us climbers has meant that intense training doesn't transform into fastidious inflammation. Sponsor: Marmot, Wild Climb, Turnover Sport, Ferrino