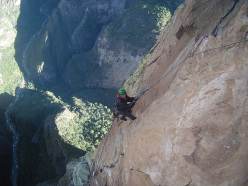 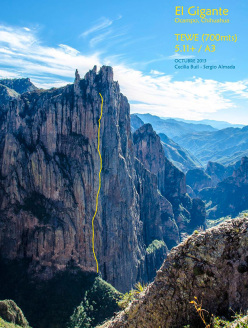 After establishing Simuchi, the first route to breach the 1000m El Gigante big wall in Mexico in 1998, and after having forged Yawira Batu in 1999, this autumn the highly talented Spanish alpinist and big wall specialist Cecilia Buil returned to the Candameña canyon to make the first ascent of her third route Tehuél. Buil teamed up with local climber Tiny Almada and from 8 - 18 October they established 21 pitches protected by a mix of trad, peg and bolts. 7 pitches are shared with a new route of which there are no details regarding the name and first ascentionists.

The initial plan was to go ice climbing in Chile but just 4 days before the flight my partner, Marta Alejandre, seriously injured her knee while sport climbing. We had to cancel the trip and I suddenly found myself searching for what to do with my motivation and time. In the end I decided to go to El Gigante in Chihuahua, Mexico, since it's adventurous and can nevertheless be organised quickly as the logistics are not complicated.

I know the El Gigante rock face well as 15 years ago I was lucky enough to make the first ascent of this peak: together with Carlos Garcia Ayala I spent 16 days establishing Simuchi (VI, 1000m, 6c/A4). A year later we returned and spent 12 days establishing the second route up this face, Yawira Batu (VI, 750m, 6b/A4+), so I certainly feel at home there.

Unfortunately Carlos couldn’t come this time round, but he put me in touch with 24-year-old Tiny Almada, a strong local climber from Chihuahua who was really motivated to climb the wall he had seen ever since he was a child. So I travelled to Chihuahua and started to organise the climbing trip with Tiny and Oscar Cisneros, who was going to help us with the logistics and with carrying equipment to the base. Oscar, two locals and I transported our gear to the base of the wall and established base camp in the Candameña canyon. Tiny arrived some days later as he had to work that week and we immediately set about climbing.

After fixing the first three pitches, we then set off with food and water for 12 days. After 5 days a storm came and we were forced to stay in our portaledge for 3 days and could not climb anything. The river was enormous and the Piedra Volada waterfall became spectacular. We were worried but at the same time it was beautiful to feel the strength of nature and witness the transformation of the canyon that feels as if it belongs to another era. When the storm finished we started climbing again, past what turned out to be the best pitches of the route. We topped out after 11 days on the wall, and 15 after having left our cabin at Basaseachi.

The route we climbed takes a line up the lefthand side of the face and shares 7 pitches with another route opened recently of which we don't know the name, and the first pitch with Yawira Batu, my second route. Despite being not too difficult, the bottom section was dirty and contained some loose rock and that’s why we climbed slowly and couldn't free many pitches. While we dislodged most dangerous, loose blocks, this section still needs to be cleaned properly. We expect to do this on another trip. The upper section on the other hand is beautiful and breaches clean, good quality rock. Finally, the route was named Tehue, (VI, 700m, 7a/A3) and is 21 pitches long.

This project was made possible thanks to the support of Trangoworld, CAMP and the Chihuahua Government.