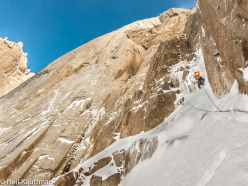 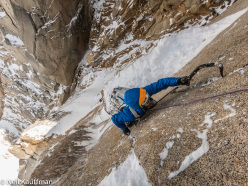 On 2 January 2014 the Americans Joel Kauffman, Neil Kauffman and Mikey Schaefer made the first ascent of Super Domo (V 600m WI5 M6) up the East Face of Cerro Domo Blanco in Patagonia.

Even if conditions in Patagonia are currently completely different compared to the last two seasons (this time last year circa 50 alpinists successfully climbed Cerro Torre), those who know how to wait for the seize the moment are managing to come home with some superb new routes. The latest has been put up the Americans Joel Kauffman, his brother Neil Kauffman and Mikey Schaefer, three alpinists whose climbs at the end of the world have often graced our pages. At the start of January the trio established Super Domo, a great new route up the East Face of Cerro Domo Blanco in the Piergiorgio / Pollone massif that breaches difficulties up to V WI5 M6 and which, after the first third, crosses La Suerte Sangrienta put up in 2007 by Chris Brazeau, Jon Walsh and Crystal Davis-Robbins.

Schaefer and the Kauffman brothers reached the Niponino Camp on the first of January and set off at 5:00am the next morning, walking across the glacier to then cross the Bergschrund and start the route up Cerro Domo Blanco's East Face. After a relatively easy ice and mixed start, during which they simul-climbing on several occasions, they then breached more difficult mixed terrain up corners, cracks and chimneys. A final, ice-filled chimney paved the way to the summit and this was reached at 9 pm. Feeling the full brunt of the winds as they crossed the Hielo Continental Sur unhindered, the three then immediately started the descent.

"I've never seen waterfall ice form like that in Patagonia" writes Neil Kauffman on his blog, while Rolando Garibotti on pataclimb.com gives another indication as to the beauty of these 600 metres: "It is a phenomenal ice and mixed line, easier than Exocet but equally good in quality. It is protected from the wind and hence a very good candidate for questionable good weather windows. It is a line that deserves to become an instant classic."

For a complete write-up and more photos check out www.planetkauffman.com