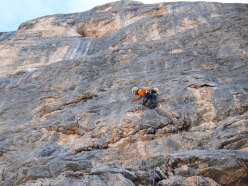 Summer 2012, along with my tireless friend Helmut Gargitter, a talented alpinist and strong mountain guide, we've managed to establish another difficult route up the outstanding south face of Col Bechei.

The route is located on the righthand side and follows a series of obvious pockets up almost always solid, rough rock. We have equipped the route with bolts but we recommend you nevertheless take a set friends and nuts.

You can either abseil off the route if you want to repeat another line nearby, or walk off easily down the alpine meadows, along the path that leads to Lake Limo and on to Rifugio Fanes.