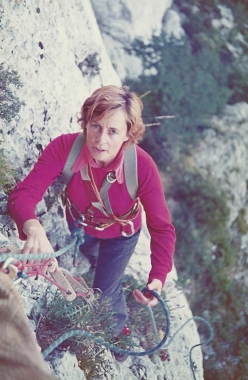 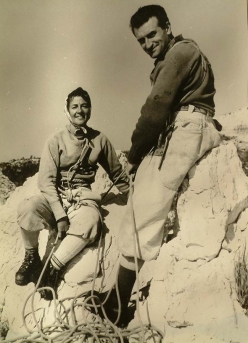 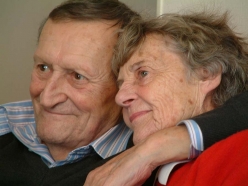 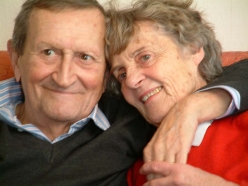 Sonia Livanos, goodbye to a great alpinist and woman

French alpinist Sonia Livanos passed away on 15 April 2018 in Marseilles hospital at the age of 95. In the '50s and' 60s together with her husband Georges Livanos she formed one of the strongest climbing partnerships in the Dolomites and beyond.

On Sunday, April 15, Sonia Livanos joined her beloved husband Georges, her partner in life and in climbing who had left us in May 2004. Georges "the Greek" Livanos and Genevieve, this her real name although everyone called her by her nickname Sonia, formed not only one of the most famous and strongest climbing partnerships of the '50s and' 60s, but also one of the most pleasant and fascinating. Georges was a talented climber who had learnt the ropes at the revolutionary school of the Calanques, and he was gifted not only with an overwhelming love for climbing and the mountain, but also with an extraordinary verve and humanity. Sonia, a minute"one meter fifty and 50 kilos", had a fortitude and an immense love for her husband that, combined with her stubbornness and also formidable skill, made her an ideal partner, on and off the walls. The two, therefore, formed a truly unique couple, not just in the mountains, so much so that they became legendary and were much loved in France and also the Italian Dolomites. In particular Civetta and the brenta Dolomites soon became their preferred “terrain d’aventures” and holiday destination, along with the backyard rock faces in the Calanques. Georges and Sonia carried out a flurry of first ascents, including climbs on the West Face (1957) and NW Arête (1964) of Torre Venezia (Civetta, Dolomites). Sonia notably made the first female ascent (4th overall) on the Vinatzer climb up the Marmolada South Face (1952) and on the North Face of Torre di Valgrande (Civetta). One thing is certain: Sonia and Georges were special mountaineers and their climbing partnership wrote important pages to the history of rock climbing in theDolomites. But there is something even more certain: Georges and Sonia were special people. Sonia had a smile, a strength and a kindness that is difficult to forget. Even many years later…

An afternoon with Georges and Sonia Livanos (by Vinicio Stefanello)

From above, Marseille appears sculpted by light against the backdrop of a brilliant sea. It is a liberation: after such a long drive along the motorway, and after so much rain, the city of "Le Grèc" and Sonia could not have welcomed us with a bigger smile. It’s November 2003, we are going to visit Georges the "Greek", and Geneviève (know to everyone as Sonia) Livanos, the most famous climbing couple of the 50s and 60s. We’d read their stories, we knew about the climbs... now we ring the belt to their flat in a white (and somewhat anonymous) apartment bloc of "upper" Marseille. We are immediately welcomed as old friends. Sonia has intelligent, attentive eyes, all fixed on Georges, her life partner.

"Sonia did the big climbs with us. This was another step of my adventure," says Georges. He is astute, cheerful, always ready crack a joke, and a spark ignites within him when he talks about climbing, rock faces, the Dolomites. This is how our afternoon begins revolved around talking, memories and laughter. A conversation (with sweet pastries) without an underlying theme and without feeling rushed. Almost timeless. Georges Livanos was one of the strongest climbers of his era, certainly one of the most gifted. Gifted with irony, too, with the ability to laugh at himself, with "humor" as he says. Born in 1926 in Marseille to a family of Greek origin, he started climbing at an early age: "They always introduced me as a climber from Calanques" he tells us "but I actually started in Chamonix, aged 13, on a very easy mountain." Alpinist or rock climber, therefore? "I liked climbing when I was a boy, but afterwards I always searched for adventure, I wanted to be a true mountaineer and, possibly, one of the best: youngsters always want to be champions!”

The first time in the Dolomites? "The Cassin route on Cima Ovest di Lavaredo: back then it was the only route up the face and ours (I climbed with a German) was the tenth repeat. I was on form, but the climb left its mark: it was very difficult, not so much for the actual moves but for the climb in its entirety, for the ambient. My partner told me I lacked a bit of audacity to become a great climber... And I thought: maybe my arms aren’t particularly strong, but if I fuel them with a bit of boldness then perhaps I can become a great climber!“

And the Livanos style? “What mattered to me was that the undertaking was successful: what counted was getting to the top." Free or aid? "If I had to resort to aid, then I did... I was very good at aid climbing, and I wasn’t too bad at free climbing, either.” Every now and then I also hammered in a peg, on certain sections where perhaps it wasn’t really needed. Well, I didn’t consider this as important as reaching the top safely, or as important as returning to the mountain hut in excellent shape, ready to enjoy a good glass of wine!" Finally some alpinism that is solar I exclaim. "Oui, mine was "calm" climbing, even when I breached great difficulties, even if I never retreated from a route." continues Georges in his excellent French-Italian. “I always valued the route as a greater whole, the entire experience, not the single moves. Just like when I’m in a restaurant: I always order the full menu!”

Every joke provokes a smile, some laughter and the first to laugh is always Le Grec. "We dealt with mountaineering with our humor. Maybe not when we up in the mountains, but later, when I talked about my climbs, then my gaze became slight detached - just like in my book " Au delà de la Verticale”. What about a detached comparison between climbing on Mont Blanc and in the Dolomites? "In Chamonix it’s ​​a bit like in the Calanques: you went to the bar, ate, drank, smoked, and then someone asked: "What should we do tomorrow?" Ah, let's go there. So we set off with the train, di the climb ... then we went back to the bar, to smoke, drink ... But we, Sonia and I, in Civetta or in the Brenta Dolomites, we stayed up in the mountains for a whole month, in the rifugio. We also got to know some lumberjacks, some shepherds, and we became friends with them. We were on holiday and we enjoyed being up in the mountains…"So what were you long stays like up in those huts? "We had a good time in the rifugi. We’d talk a bit with one person, then with another. Then, inevitably, the time came to set off and climb some rock… That moment, as that person once said, when: the beautiful threatens!“

And what about memories? "The climbs spring to mind. In the beginning Gran Charmoz, not because it was difficult, but because it was an original adventure since I wasn’t used to that terrain. Then the Cassin route up Cima Ovest di Lavaredo, my first time in the Dolomites. Then certainly Cima Su Alto on Civetta: Soldà had described it as the biggest problem in the Dolomites, so I went to see it for myself. It was tough, yes, but there was no section that posed a particular problem: we progressed calmly. My friend (Robert Gabriel, Ed.) was very strong, eh, very strong mentally, and I too wasn’t that weak... And then I also remember other beautiful climbs: I did quite a few, eh ... But I liked everything about the mountains. The mountains and everything that revolves around them."

Yes, I liked this afternoon too, everything that revoked around it. I relived Georges great passion, maybe he did too when he talked about his work, his life, without regrets: "I worked every day, but I never worked well because my mind was elsewhere, in the mountains! I only thought about climbing. Yes, my life was beautiful because I took to the mountains, because I met so many interesting people... “

We depart lighthearted, happy, and when we get into the car we take a last look at the Livanos balcony: Georges and Sonia are there, smiling, waving goodbye. And now, many months later, after Georges has left us forever, I think back to that gentle wave. It was a lovely present! Adieu Georges, great man with an immense heart, à bientôt Sonia!