► News ► Alpinism ► Solo per i tuoi occhi, the great icefall on Monte Pelmo climbed by Ballico and Milanese 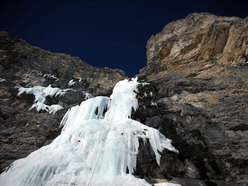 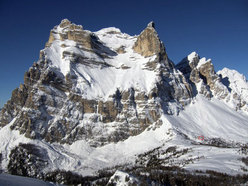 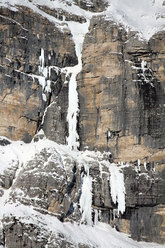 Solo per i tuoi occhi - For your eyes only
Photo by arch. L. Brigo 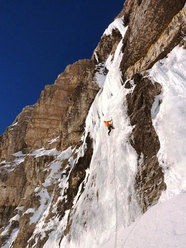 PORTFOLIO / gallery Portfolio: Solo per i tuoi occhi, the great icefall on Monte Pelmo climbed by Ballico and Milanese

Solo per i tuoi occhi, the great icefall on Monte Pelmo climbed by Ballico and Milanese

On 23/01/2011 Giuseppe Ballico and Marco Milanesi carried out what is believe to be the first ascent of Solo per i tuoi occhi (300m, V, WI 5+ XRM), the massive drip on the ESE Face of Monte Pelmo, Dolomites.

Solo per i tuoi occhi - For your eyes only - is a great icefall wedged in the magnificent ESE Face of Monte Pelmo. Three hundred meters of ice, plus a long approach and scramble up the pedestal which leads to the "Trono" o "Caregon del Padreterno". According to the legend, God rested here after having created the nearby Dolomite beauties Antelao, Marmarole, Sorapiss, Cristallo and Tofane. It goes without saying therefore that the view from up there is one of those which one simply cannot forget. And it is equally evident that the effort needed to enjoy this scenery in winter and climbing that strip of ice is neither simple nor risk free. Despite these factors, Giuseppe Ballico and Marco Milanesi simply failed to resist temptation on 23 January. Worth noting is that Ballico had only recently become a father for the second time... The only thing left to add to this probable first ascent (when dealing with icefalls the first ascent is often unclear) is that this climb is one of those to be treasured, and not only because of its beauty and irresistable draw in one of the most beautiful corners of the Dolomites..


Describing the emotions you feel when a baby is born is no mean task, even when it's your second. This is how the new year greeted me, albeit a couple of days ahead of schedule, when my second child Eleonora was born. I returned home excited by the birth and turned on my computer to send the news to my friends and while I relaxed and the tension oozed out, a photo taken that very same day by a ski mountaineering friend of mine immediately caught my attention.

The photo was of Monte Pelmo taken from Monte Penna, a classic viewpoint which immortalised the marvellous "throne" or "seat". I was drawn in by a line of ice which fell directly from Valòn and finished on a ledge a couple of hundred of meters above Campi di Rutorto. "Gobsmacking!!" is what immediately passed through my mind. But since the resolution of the photo was too low I failed to decipher an approach route to reach the drip, seeing that the base of Pelmo was protected by a circa 200m high pedestal. I phoned Armando, my ski mountaineering friend and he quickly sent me more images. At last I managed to zoom in, but since they were taken from a distance I still couldn't make out the precise details of the pedestal... what a shame!

During the next couple of days I was taken in by completely different thoughts and obligations and so I pushed the project to one side. It was cold, really cold, then all of a sudden from minus loads below zero... the first primroses appeared... I browsed through the various forums and realised that many of the more popular icefalls were practically unclimbable... what a strange winter! And so on 15 January, while waiting for the cold to return, I took half a day off and relaxed climbing ice with O°C at 3000m. In the meantime another friend of mine skinned up to Monte Penna and, being a keen photographer, managed to take a close-up shot of the icefall. I was pleasantly surprised to make out a way up through pedestal and that the drip was still in good condition.

The following week was marked once again by abnormal temperatures and warm sun packed the snow as hard as cement. But given its orientation (ESE) the sun certainly didn't do the drip any favours... Phone calls were answered with the following replies: "I can't, I'm dining with friends, anyway, you must be crazy to set off that early!" It wasn't easy finding a soul who wanted to accompany me on this ascent which I really wanted to carry out in a single day. Only Marco Milanese showed some interest - as is the case when it comes to interesting projects. I talked him through the plan and he replied "Let's do it!"

03:30 at Conegliano, Marco he had set off directly from Udine while I, due to my son's strange sleep patterns, had been awake since 2.00am... I filled the thermos flask with coffee and off we went. We reached Zoppè di Cadore at 4.45: the dark, our tired state, the cold (-12°C) and above all the uncertainty of finding the drip in condition were all the right ingredients for a successful day out... A woman appeared at a window and shouted down in dialect "Where're you off to? Going for a quick walk around Pelmo?" "More or less..." we replied.

We progressed in the light of the full moon, practically without using our headlamps, and the packed snow was as smooth as marble. We ascended quickly almost all the way to the col Passo di Rutorto when all of a sudden the moon's immense beam in the dark of the night played tricks on us, it seemed as if the icefall no longer existed... "It can't all have collapsed!" we exclaimed and pushed on. Dawn arrived at 6.45 and it all sprung clearly into view: the icefall, the approach, the pedestal. And with arrival of a new day came an new inner drive which pushed away our tiredness and indecisiveness.

After two hours we finally reached the base of the wall. We prepared our gear and opted to stash a small rucksack on the ledge above the pedestal. We ascended quickly thanks to the hard-packed snow, past a couple of mixed sections, and up rightwards where I had noticed a gully with a couple of steeper ice sections which led directly to the large ledge. It was 8.00am and the first golden rays of light began to illuminate the icefall! In circa an hour we climbed the 200m pedestal, this proved to be less difficult than I had feared. Marco set off after we had quickly analysed the drip: it was overhanging and would prove to be a filter crux for the pitches than followed. With one long 60m pitch Marco huffed and puffed his way up the booming drip. I joined him at the belay and looked at the paradise of peaks surrounding us, from Antelao to Bosconero and, above all, the immense void beneath our feet.

I then climbed a pitch with some extremely thin ice at the start. My crampons scratched against the rock, breaking the brittle veil of ice which supported me. The ice screws didn't drive in. I placed a nut and continued up the brittle ice which soon became harder but remained fairly thin. After 40m I was unable to find a suitable place to establish a belay because of the lack of ice and I continued up over a vertical section and finally found a belay. This pitch really tested me - with its thin vertical ice, marginal pro and the occasional chunks of ice which whizzed down close to me. I was tired but happy.

I then belayed Marco. He shook his arms on various occasions to get the pump out and then prepared himself for the final pitch up the stalactite. Unfortunately this was broken at half-height and since it looked dangerous we certainly didn't want to take any further risks. This was a wise decision, seeing that the gully to the right proved to be a fun but by no means easy alternative finish.

We shook hands, looked towards the exit via Cengia di Ball immediately to the right and then quickly abseiled off the Abalakovs we had cunningly prepared earlier. All that was left to do was to abseil down the pedestal and although this proved problematic due to the rocky terrain, in just over an hour we were kissed by the sun once more and reached our yearned for rucksack and had a drink.

We looked at the icefall one last time. I'd like to dedicate it to my daughter Eleonora, born on the same day that I first heard about this great little jewel in the Dolomites. I'd like to thank Marco for the excellent company and above all my life partner who supports me, in all senses... with this love of mine.

>> SOLO PER I TUOI OCCHI