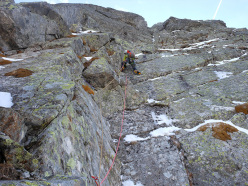 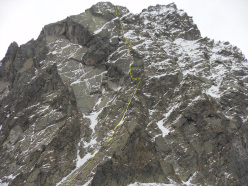 The report by Francesco Groppelli about Sogni di Gloria (M4, 360m), a possible new ice and mixed climb up the North Face of Punta Angelo (Adamello - Presanella massif) climbed on 29/11/2015 together with Maurizio Piller Hoffer.

Last weekend Rifugio Segantini was busy with winter climbers. The routes on Monte Nero had come into excellent condition but we decided to do something different…

We parked the car at Malga Vallina Amola and instead of heading up right towards the Segantini hut, we broke off left, crossed the small plateau and then began the scramble. We were heading for the north face of Punta Angelo which we’d scrutinized with our binoculars the day before.

We climbed a new route by following the logical lines of weakness up the face. The climbing, always pleasant and never too demanding, ran smoothly and in just over three hours we reached the col a few meters below the summit. Now all we had to do was descend! Yes, but from where? On the summit we stumbled across an anchor which would have enabled us to abseil down the, for us, unknown south face. What should we do? After quickly discussing our options we decided to abseil down are line of ascent and equip the belays for those wishing to repeat the route.

We reached the base of the face at dusk and after having walked back down the scree slope reached Malga Vallina in the dark, trying to cross the icy stream without falling into it! A new route with difficulties never extreme, but with some sections that are by no means trivial. About 300m of climbing to the col, M4 max. Then we gave the route its name ... Sogni di Gloria, Dreams of glory.