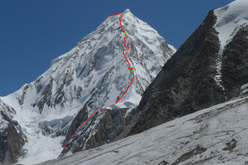 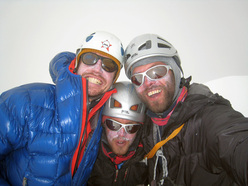 At the end of July Slovene climbers Ales Holc, Peter Juvan and Igor Kremser made the first ascent of on Xuelian North-East (6249m), in the Xuelian Feng range, Tien Shan, China via their route Arête of Trust (ED2, AI5, M5+).

On 30/07/2011 three Slovene climbers, Ales Holc, Peter Juvan and Igor Kremser set foot on the hitherto unclimbed Xuelian North-East, a 6249m peak in the Tien Shan mountain range in China. The Xuelian range had first been explored from the north by Bruce Normand in 2008 and 2009, during which many 5 and 6-thousand meter peaks were first ascended and awarded with the Piolet d'Or 2010. Normand generously provided much information for Slovene expedition which has provided the following report.

“Xuelian North-East, despite being attempted in 2009, remained an unconquered fortress, a true guardian of the Muzart glacier, standing at its source and overlooking the Muzart pass and the meadows of our base camp.

Being a huge mountain many routes can be identified, but the one clearly visible from base camp offers a tempting and safe climbing experience. The route, which we called Arête of Trust and dedicated to Andrej Magajne - a friend who lost his life in Slovenian mountains on March 8th, 2011 - follows the NW arête for more than 3 km. The 2400 vertical meters, followed by 400 meters along the summit ridge, required two full and two half days of simul climbing on alpine ice, snow and mixed terrain.

We established the route between July 27th and 30th at ED2, AI5, M5+ in 36,5 hours of effective climbing. We summited at 2pm in deteriorating weather with clouds blocking the view. An hour later we started our descent down the south-east slope in low visibility, guided only by a printout of a Google terrain map and a GPS. The descent took us another one and a half days of simul climbing (AI3, 80-60°, 2000 m, 14h effective climbing), mainly roped and protected and with only three rappels, before a long march over a glacier covered with 30 cm of fresh snow led us back to our ABC.

Looking back at our time spent on the mountain, the view of the climb was covered in mist. Now, a month later, we can clearly see our second bivi on a ledge, cut out from a knife-edge ice ridge with splendid steep views on both sides of the tent; our third bivi where the MSR Reactor stove failed and left us with only a half-day supply of water; the top ridge which is always longer than expected and the artistically sculptured band of seracs directly above our line of descent, fortunately only revealed briefly by the mist.