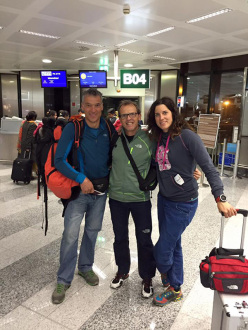 The alpinists Simone Moro and Tamara Lunger have set off for the Pakistan’s Karakoram to attempt the first winter ascent of Nanga Parbat (8125m).

Italian alpinists Simone Moro and Tamara Lunger set off a few days ago to attempt to make their dream come true: carry out the first winter ascent of Nanga Parbat. The only 8000er which, together with K2, has never been climbed in the coldest season. After their failed winter attempt on Manaslu in February 2015, the two have now set their sights on an even more complicated and coveted goal: follow in the footsteps of Herman Buhl and climb the 9th highest mountain in the world. Not in summer however, as the legendary Austrian first ascentionist did on 3 July 1953, but in winter. The two intend to climb the route Moro tried in 2012 with Denis Urubko, via a line up the Diamir face first attempted by Reinhold Messner and Hans Peter Eisendle in 2000.

The alpinist from Bergamo is the only climber to have three winter 8000m first ascents to his name, namely Shisha Pangma (2005), Makalu (2009) and Gasherbrum II (2011). For her part, after an impressive background as a ski mountaineering champion, South Tyrol’s Lunger turned her attention to the high mountains and crowned her achievements in 2014 by summiting K2. Few other women have achieved such a feat and great Nives Meroi in the only other Italian to have succeeded, back in 2006.

After arriving in Islamabad, Moro and Lunger will acclimatise - so to speak as they will attempt the first winter ascent Spantik (7027m) - together with Hansjörg Lunger, Tamara’s father (and himself a ski mountaineering champion). Then they will head to the base of the Naked Mountain. Moro and Lunger will not be alone on this new adventure, on the contrary, there will be another four expeditions (including that of Italy's Daniele Nardi), and it is due to this "over-crowding" that they have decided to go against the flow and not comunicate with the outside world during their attempt. Apart from these videos, in which Moro and Lunger describe their ambitious project.