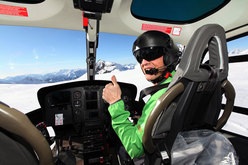 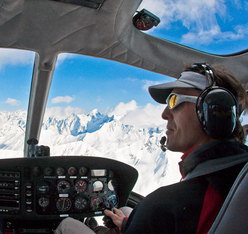 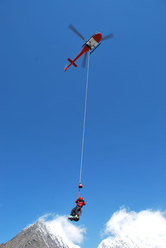 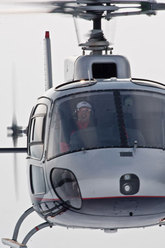 Interview with Simone Moro about the latest helicopter rescues in Nepal's mountains.

Over the last few days there has been much talk about critical situations in the Nepalese Himalaya and ensuing rescues and helicopter operations. We're referring to, for example, the Spanish expedition to Lhotse which included veteran climbers Carlos Soria, Juanito Oiarzabal and Carlos Pauner. After the summit on 21 May, one of the alpinists - Manolo "Lolo" Gonzalez, encountered difficulties and didn't make it back to Camp 4 (8000m). Luck had it that two Argentine mountaineers, Damien Benegas and Matias "Matoco" Erroz had just descended from Everest's south col and the two re-ascended towards Lhotse and, with some difficulty, recuperated Gonzalez. The Spaniard was then helped down by Benegas, Erroz, Phurba Tashi, Nigma Chering and other mountaineers to Camp 2 where he was airlifted to safety by a helicopter along with another alpinist in difficulty, Roberto Rodrigo. Edurne Pasaban and Willy Benegas helped co-ordinate the rescue mission from Base Camp. To find out more about these rescue operations and how helicopter rescue missions are developing - not without difficulties - in Nepal, we decided to get in touch with Simone Moro. The Italian is currently in Nepal not in his usual vest as Himalayan mountaineer but in what is fast developing into his second life: a mountain rescue helicopter pilot.

Simone, why are you in Nepal on helicopter rescue missions
Because it's high time that one of us does this sort of thing, without waiting around for a freebee, for some sort of divine intervention...

What do you mean... is this something that stems from alpinists to save other alpinists?
Yes, but not only. This country has ground to a halt and needs the means to progress, to bring help to the local population, too. The country's main industry is tourism. You have no idea how many people we're rescuing at the moment, loads of trekkers, but also alpinists. Many alpinists.

You're an alpinist yourself. Is this a help?
The fact that I'm first and foremost an alpinist, and then a helicopter pilot, helps me to immediately understand where to operate, to comprehend the conditions, the risks, the real needs and if a rescue operation is feasible or not.

Who do you work for and in what guise?
I work for Fishtail Air. In truth, so far I've worked for free, paying for the trip and finding a place to stay out of my own pocket... I wanted to make a point and lend more than just a hand to make this system work. Obviously I'm also here to learn something. Fishtail Air is the only organisation that collaborates with Air Zermatt and which has pilots who have been trained specifically for rescue operations - also for missions with an operator clipped to a long line. As some may remember, last year the Air Zermatt operators carried out the highest rescue in history, at 6950m on Annapurna. And then they landed at 6850m and transported two Sherpa to altitude to search for 3 missing mountaineers on Manaslu...

Tell us more about your recent operations... beginning with the rescue operation of one of the local inhabitants
A few days ago we rescued an old Nepalese of Tibetan origin in a village in Upper Dolpo. Just finding the place and landing there isn't something which can be taken for granted... You need to fly for a couple of hours over wild valleys, map and GPS in hand and transport extra kerosene to refuel the helicopter. The Nepalese/Tibetan was circa 60 years old and unwell. We flew for circa 4 hours to reach and transport him to hospital in Kathmandu, flying over 5200m high mountain passes through the clouds, so we really had to find a way through and how to get there in the first place... There were two of us (myself and another pilot, Sherkan Ashish) in the As350 B helicopter. This isn't particularly powerful but it was the only one available seeing that the B3 was being used elsewhere on a different mission at higher altitudes.

Who paid for all this?
He did. He was lucky and could afford it... usually those who call have some sort of solution.

But those who can't... what do they do?
We try and sort something. It's worth noting that we arrange special discounts for the Nepalese population in order to extend this service as far as possible. Obviously we can't do it free of charge as the helicopters cost more than 2 million euro a piece... and the leasing rates or bank loans need to be paid.

Is there a program, or a concrete hope, that this rescue service may become viable in the future for many, or is this science fiction?
For the time being it's science fiction, seeing that in Nepal there is no public healthcare and only 0.1% of the population have private insurance. But thanks to these helicopter missions local hospitals are being created in villages and various valleys. Schools are being established, as are roads which facilitate land transport, and communication is being improved, too. Mobile phones work in many valleys nowadays, even some remote ones.

What is needed?
Government intervention, a form of healthcare, but Nepal simply doesn't have the funds for this... Let's say that for now there's a potential service which is saving loads of lives. Over the last couple of days it really seemed as if we manned an emergency desk of some mountain rescue team...

Yes, let's return to the theme of alpinism and "tourism"... can you give us some examples about recent rescues?
Last week some Spanish mountaineers belonging to an expedition led by Juanito Oirzabal and Carlos Pauner on Lhotse were rescued, first on foot, then by helicopter. Oirzabal and Pauner were helped and rescued, but returned to Base Camp on foot, albeit very slowly. Juanito Oiarzabal and Carlos Pauner were helped above all when, at the start of the descent through the Icefall, they proceeded so slowly and Oirzabal almost collapsed and was carried to base camp. Yesterday other Spaniards with frostbite on Lhotse were rescued. In particular, two days ago a Spanish mountaineer was plucked from Camp 2 at 6300m.

Who was the mountaineer rescued by helicopter from Camp 2?
Manolo "Lolo" Gonzalez, the Spanish mountaineer who, while descending to the base of the Lhotse couloir, fell and remained there, immobile and exhausted. Descending from Everest, the Argentines Damien Benegas and Matias "Matoco" Erroz decided to climb back up to where "Lolo" was located and they carried him down to the tent in Camp 4. The next day, helped by other alpinists, they carried him down to Camp 4 and from there he was taken away by the Fishtail Air helicopter. Oirzabal & Co. were helped by other commercial expeditions, even though they always refused to take supplementary oxygen and medicine.

What about other recent rescues?
An American alpinist was rescued over on Kangchenjunga. I'd met her in 2010 and, quite frankly, she didn't make a good impression with regard to her mountaineering ability and physical resistance. This year she climbed Kang with supplementary oxygen flow open to the max, with numerous bottles and Sherpa. Immediately after the summit she began to feel exhausted and she had to be transported / dragged to 7000, 7100m. It was at this point that they asked us to rescue her by helicopter: we tried but it was too warm (only -8°C) and the helicopter failed to hover and kept "sinking"... so we asked them to transport her to a lower altitude and then we "plucked" her off at 6200m.

Do you reckon that the advent of helicopter rescues is changing, or might change, Himalayan mountaineering? If so, how?
No, I really think that these rescues can't change it. Helicopters still have so many limits, especially if you bear in mind the fact that the highest helicopter rescue ever was carried out, as mentioned previously, at 6950m on Annapurna (to rescue Oirzabal, Pauner & Co.). There have been some rescue operations (documented) at 7000/7100m with provisions and oxygen bottles being dropped, but this is only possible on flat sections, on large plateaus, almost nowhere therefore...

So what do you feel you might say to alpinists (and tourists)... also in the view of the latest accidents?
Many of these calls come from people who perhaps could avoid getting into trouble in the first place... What I mean is people who shouldn't really be on these gigantic mountains. I see people who are simply too close to their limits and so they're a stone's throw away from getting exhausted, suffering from frostbite, ascending slowly etc... I don't want to sound arrogant, but unfortunately that's the way things are.