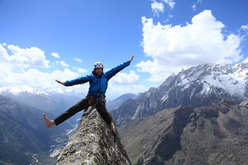 The full-length film Shoshala is now online, dedicated to Giovanni Quirici who died on the Eiger on 12/08/2011.

A promise kept. After the trailer in November, the complete version is now online of the film Shoshala Trishul direct, the film dedicated to Swiss alpinist Giovanni Quirici who died on 12 August 2011 after a fall from the route Le Chant du Cygne on the North Face of the Eiger.

The film documents Quirici's last expedition together with Swissman Elie Chevieux and Frenchman Yannick Boissenot to the Baspa Valley in northern India where the trio established, after 10 days on the wall, their route Trishul direct (700m, 7b) up the virgin summit Shoshala (4700m). Definitely worth watching.