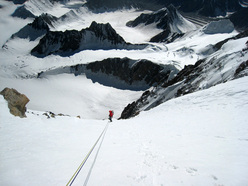 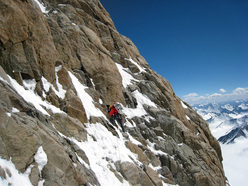 Climbing though the rock band
Photo by Steve Swenson 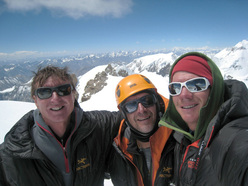 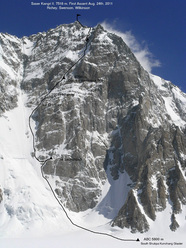 On 24 August 2011 a small American expedition comprised of the highly experienced Mark Richey, Steve Swenson and Freddie Wilkinson completed the first ascent of Sasser Kangri II in India's Eastern Karakorum. The massive new line, dubbed The Old Breed, ascends the south face for 1700m and was climbed in alpine style over 5 days with difficulties up to WI4 M3.

Richey and Swenson had previously attempted the peak in 2009 but had been pinned down by bad weather at 6500m. This attempt prompted the alpinists to change tactics and during the 2011 acclimatisation period the trio first climbed from Advanced Base Camp at 5800 on the South Shukpa Kunchang Glacier to 6000m to reach and prepare the only decent ledge along the entire route which they called the Launchpad.

Warm weather and rockfall forced them back down and they chose to acclimatise on the colder North Faces, netting what Swenson describes as "one of the most compelling ice lines" he had ever seen in the Karakorum: the 6580m high Tsok Kangri, climbed on 30 July via their 680m WI4+ route in 22 hours. During the descent Swenson started to feel the effects of a sinus infection and decided to recover at circa 3000m in the Nubra valley the following week.

On 20 August the three alpinists returned to ABC and the next day they climbed the first 8 pitches to the Launchpad, from where they set off at 3:30am the next morning on their summit push. The trio simul-climbed up easy terrain to reach their 2009 highpoint at 10.00am and continued upwards, past a band of rock and ice to a rib at 6700m where they put to good use Richey's invention, the "Ice Hammock", a fabric with webbing loops used to build a tent platform. At this point Swenson felt the effects of the infection but decided to push on nevertheless.

Day 3 dawned bright with the three high on the major ramp system which led to the most technical pitch of the route, the Escape Hatch. After dispatching with this they climbed easier terrain to circa 7000m where they carved a platform and established their third bivouac, circa 500m below the summit.

On August 24 and in perfect weather Richey, Swenson and Wilkinson summited and noted that the 1985 Japanese team had stopped short of the true summit. Swenson explains "The place the Japanese expedition reached was just a point on the shoulder of the mountain and not a separate lower summit of the peak. Because many climbers thought Sasser Kangri II had been climbed, the mountain probably did not receive the attention it might have gotten if no one had claimed the summit. This misinformation worked in our favour though because it was only after carefully researching this issue before our attempt in 2009 that Mark and I came to the conclusion the Japanese "West Summit" was probably not the top and the peak was still unclimbed. When we arrived on top we could clearly see that our theory was correct and that we just made the first ascent."

After an hour on the summit they descended to their third bivouac but the infection Swenson had been fighting for the last month began to re-emerge seriously. 30 abseils later they finally stumbled into ABC exhausted, but the ordeal was not over as Swenson spent the night coughing mucus. After receiving advice from his doctor in the USA, Swenson was airlifted to hospital the following afternoon where he received treatment and has now thankfully almost fully recovered.

For the record, at 7518m Sasser Kangri II was the world's second highest unclimbed summit prior to the American success. The highest virgin summit is believed to be Gangkhar Puensum (7570m) in Bhutan but this, like all peaks above 6000m in this kingdom, faces restrictions due to local religious beliefs.


Swenson has over 4 decades of climbing activity under his belt in Canada, Alaska, Pakistan, and Nepal and important first ascents to his name such as the Northeast Face of Kwangde Nup along with Alex Lowe in 1989 and the 10 kilometer Mazeno Ridge at 7000m on Nanga Parbat together with Doug Chabot in 2004, as well as without supplementary oxygen ascents of both K2 in 1990 via the North Ridge and Everest solo in 1994. In 2009 he was elected President of the American Alpine Club after serving as Vice President and he has kindly shared this brief insight into his latest expedition.

Steve, you enjoyed truly perfect conditions this year
Yes, we did have good conditions and good weather which made it all possible.

You didn't enjoy the best of health. Did you ever consider turning round?
When I started feeling sick again it was my goal to try at least to get to the highest bivouac so that I could stay there and Freddie and Mark could go on to the summit if I felt bad. But I felt good enough to go to the summit that day and only started feeling really bad on the descent.

The old breed. What's behind the name?
Freddie - the young guy on the trip - named the climb The Old Breed and I’m not sure what the significance of this name is yet as I haven’t talked to him about it yet. It is probably an allusion to Mark’s and my age, 53 and 57 respectively, but I think there may also be a double meaning that I haven’t determined yet.

How would you rate this climb in terms compared to your other first ascents?
I’d put this climb in the top ten of the big alpine climbs that I’ve done.