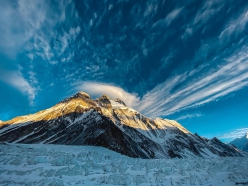 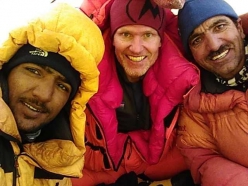 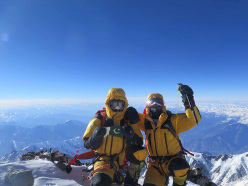 Nanga Parbat in winter: Ali Sadpara and Simone Moro on the summit on 26/02/2016
Photo by archivio Simone Moro 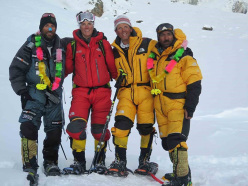 Pakistan’s national flag carrier PIA (Pakistan International Airlines) has relaunched its scenic Air Safari service and, in doing so, has officially renamed it Sadpara Air Safari in honour of Muhammad Ali Sadpara who lost his life in February this year along with John Snorri Sigurjónsson and Juan Pablo Mohr Prieto while attempting a winter ascent of K2.

The Air Safari takes off from Islamabad every Saturday and on its way to Skardu flies over K2, Nanga Parbat, Broad Peak, the Gasherbrum peaks, the Deosai plains and the famous Said ul Maluk Lake. After allowing time for a short visit to region’s biggest city, the flight returns back to the country’s capital.

The service had originally been launched in 2018 but subsequently ceased operations temporarily. The inaugural flight of the Sadpara Ali Safari service took place yesterday and the 91 passengers included Spanish mountaineer Carlos Garranzo whose post is published below, as well as Sajid Ali Sadpara, the son of Ali Sadpara, who staed"It’s landmark achievement for the national carrier in development of tourism."

18.02.2021
K2: all hope lost of finding Juan Pablo Mohr, Muhammad Ali Sadpara and John Snorri alive
During a press conference held in Skardu today Muhammad Ali Sadpara, John Snorri Sigurjónsson and Juan Pablo Mohr Prieto were officially declared dead, The three mountaineers were last seen on 5 February at the Bottleneck while climbing towards the summit of K2 in winter.

20.07.2018
Karl Unterkircher Award 2018 / Nanga Parbat by Simone Moro, Ali Sadpara, Alex Txikon
The 5th Karl Unterkircher Award was awarded on 14 July 2018 in Selva di Val Gardena, Italy to Simone Moro who, together with Ali Sadpara and Alex Txikon, carried out the first winter ascent of Nanga Parbat in February 2016. The other climbers that had been nominated Ines Papert and Luka Lindič for their new route on Kyzyl Asker in Kyrgyzstan (China), and Simon Gietl and Marcel Schenk for the new mixed climb up Pizzo Badile in Switzerland.