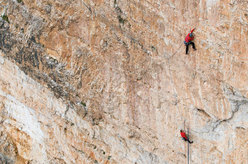 The Scoiattoli climbing in the Dolomites
Photo by arch. Rosso 70

Rosso 70, the film directed by Francesco Mansutti and Vinicio Stefanello and which retraces the 70 yera mountaineering history f the Scoiattoli mountaineering club in Cortina, has won the Jury's Special Prize during the Bulgaria's X° International Mountain Film Festival in Bansko

The Grand Prix was awarded to the Russian film Nyarma by Edgar Bartenev, which beat 80 other films from 24 different countries during the festival which took place from 24 - 28 November. Special guests included the alpinists Elio Orlandi, Erich Abram and Alexander Huber.

Rosso 70, directed by Francesco Mansutti and Vinicio Stefanello, via the recollections of its protagonists, retraces the mountaineering and life experiences of the Scoiattoli. This is a story which, ever since that distant July in 1939 during which 10 youngsters founded the group, has fed of love for alpinism and the mountains. But also and above all it has lived for that friendship and solidarity which for 70 years has been the true unifying force between the old and new generations. In this manner alpinism, love for climbing, ethics and human values were passed down from father to son, from one friend to the next to contribute towards an evolution which, in looking to the future and without ever forgetting the past, has reached present day. The film is a group testimony which represents the entire, unrepeatable experience of the Scoiattli, from the founders to the youngest members. The film includes the last appearance of Luigi “Bibi” Ghedina, the great mountaineer and one of the founders of the group, as well as Carletto Alverà, a true pillar of this society. It also includes the last appearance of Lino Lacedelli who, once again, in talking about the Scoiattoli and his historic first ascent of K2, illuminates the film with his smile and unforgettable humanity.
The film was commissioned and produced by the Associazione Scoiattoli di Cortina, and was filmed in Cortina between spring and summer 2009. After the premier on 7 December 2009 at Cortina, the film has taken part at film festivals in Trento (Ita), Cervinia (Ita), Zakopane (Pol), Lugano (Sui), Banff (Can), Bansko (Bul).