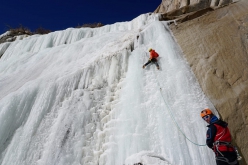 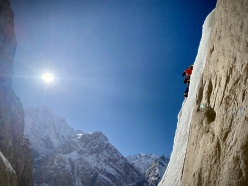 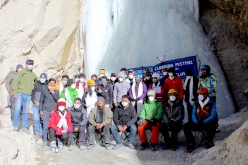 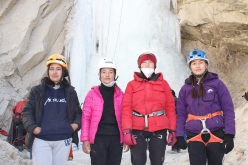 The report about the first Ice Climbing Meeting that took place in January in the wonderful Nubra Valley, India. This event proved to be important, above all because it’s the first of its kind in the Ladakh region. The report by Ladakh Nomad Expeditions.

Nubra Valley is the northern-most region of India. Situated at the tri-junction of India, Pakistan and China, this region is home to the Eastern Karakoram Mountains. This cold desert environment has an average altitude of about 10,000 feet and some of the world’s largest mountains are here. It is sparsely populated, with only about 22,000 people inhabiting 9,200 sq. miles. While largely pastoral, the local economy depends almost entirely on the Indian Army stationed on the Siachen Glacier – the longest glacier in the Himalaya.

Of late, the valley has seen the sudden rise in ice climbing as a winter sport, and the First Nubra Ice Festival was just completed on the 12th of January 2021). The festival was attended by 23 participants, including four women. The participants were all beginner climbers, and were introduced to the basic and intermediate ice climbing techniques. The festival culminated with the opening of a new crag and multiple first ascents.

The average age of the participants was between 20 and 24 years. Almost all of them were local, and had never climbed before. That being said, they had worked seasonally as ‘porters’ for the Indian Army and for Foreign Expeditions in the region, and were all extremely comfortable with high altitude and exposure.

The Nubra ice festival follows a concerted effort by local climber Rigzin Tsewang to make ice climbing more popular in the region. Indian climbing has always struggled with a lack of resources, and the problem is much worse here, one of the most remote parts of the country. Rigzin himself started his career at age 15, as a porter for the Indian Army, slowly educating himself and moving through the ranks to become a Mountain Guide. Over the years, Rigzin has explored his home valley and identified ice and rock climbs there, slowly developing the skills to be able to climb his dream routes here.

In early 2020, Rigzin teamed up with climbers Tsewang Namgyal and Karn Kowshik to develop Water Ice skills and put up new routes. They started training in other parts of India, even putting up significant FA’s in the process. In March 2020, the team spent three weeks in Nubra, establishing 4 new lines – including ‘Whisky Shadow WI4+/5 180 meters’ with American climber Carlos Buhler. After the Covid-19 lockdown was completely ended, the team returned to Nubra in December 2020, beginning to explore more and put up new FAs.

The formation of the Ice Festival was created from the desire to spread ice climbing amongst local youth, not just giving them a means of recreating in the winter, but also providing employment opportunities in the future.

The festival was run on a shoestring budget of less that 800USD and minimal gear – 4 pairs of Ice Tools, 8 pairs of plastic boots, two pairs of ropes and shared personal gear. By the end of the festival, the team had identified about 30 new lines that they plan to begin opening this season.

At the end of the festival, the participants resolved to form an association and to continue the festival in 2022 – where they plan to make it an international festival, and to invite professional teams from across the world, to build cross cultural relationships, and to continue training beginner climbers to take on the world's hardest climbs.