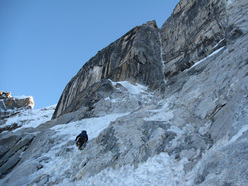 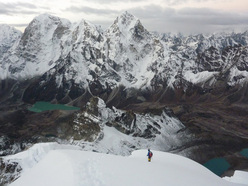 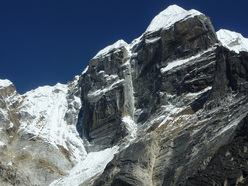 Just a few days ago we preliminarily reported about Night Terror, a beautiful new ice line up the SW Face of Lobuche East (6119m) in Nepal, climbed by the Americans Joel Kauffman and Jared Vilhauer. The two ascended the 1000m route in a 37 hour non-stop push, reaching the main summit and then descending down the Normal route via the SE Ridge.

While 30-year-old Jared is busy in Antarctica, we managed to catch up with 27-year-old Joel, on his way between Patagonia and Aconcagua, to discover not only details of the challenging climb, but also the more profound meaning behind the name of the route.

Joel, what was your aim when you travelled to Nepal?
Our aim when we picked Nepal was to climb challenging, hopefully new, terrain in alpine style. We also needed the trip to be affordable and accessible. It was my first trip to Asia and both of our first times in Nepal.

So what were your thoughts when you first set eyes on such a plum line?
My first thought was that it´s one of the more aesthetic lines I've seen. I´m super motivated by these things that are so beautiful and Jared shares the same ideals. I quickly began tearing apart the intricacies of what an ascent would entail. It was obvious, even from a long distance with 12x optics, that the water ice in the corner was sun-affected and steep. Would it be possible? Would it be safe?

You climbed slower than you had hoped...
The corner was sustained water ice at altitude and our pace slowed significantly. Jared´s biceps were cramping. The ice and surrounding rock were delicate to climb and protect. We didn't´t dare stop and make water in the Southwest facing corner because we were in a race with the sun. Once the intense sun hit the ice, it quickly melted. We had hoped to be above the water ice by noon. In reality, we climbed the last three pitches in dangerously hot conditions and finished that portion around 6pm.

How much gear did you carry?
We left high camp with belay jackets, a pair of belay pants, extra gloves, goggles, a Jetboil, 12 bars and GU´s, a couple soups and Ramen noodles, two 70m twin ropes, 10 ice screws, a set of stoppers and a set of Camalots to number 2.

How can such an obvious line not have been climbed before?
Good question. Our research hasn't found any recorded attempts. Maybe the ice is ephemeral and hasn't formed before.

A lightweight team of two...
For this objective, two was perfect. Another climber would have slowed the party down as well as been more hazardous in such a tight weakness. For other objectives, three makes more sense.

Night Terror... presumably the name is representative?
The name has two meanings. The first one is that the mental and physical crux occurred after midnight while high on the route. We encountered steep and sustained alpine ice and scary unconsolidated snow ridges.
The second meaning is much deeper. It was when we returned to Namche that we learned of Joe Puryear´s passing. We are left to contemplate how our decisions may have differed high on the ridge of Lobuche East. Would our decisions have changed had we known about our friend who had so much experience with this terrain? Joe is a genius. A lot of geniuses are using larger portions of their brain, and in different ways, than most of us. I think it is a challenge for these people to quiet their subconcious. Joe would often experience a form of sleep walking, or 'night terrors', in which he would hold conversations and carry on with others and not remember any of it after waking up.

What did Nepal leave you?
Nepal left me with a renewed perspective on how one of the most impoverished parts of the world operates. Most people wear masks in Kathmandu to avoid breathing heavy metals. When we flew into Phaplu and had to hike for two long days, from the jungle over 2500 meter passes and back down, we gained respect for earlier expeditions that started three days further down-stream in Jiri. On this cultural spur trail of the 'Everest Trek' we encountered Tamang and Rias people on sustainable living, with very little money and they were smiling.