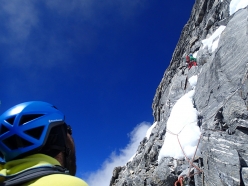 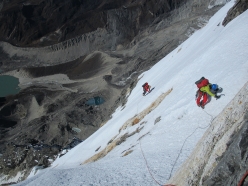 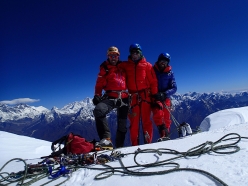 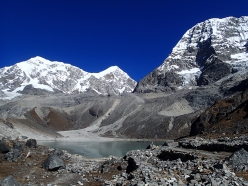 On 29 October, not even a week after having established Base Camp at 4600m, the trio began climbing up the SSW spur of Karyolung which, after the initial rocky pedestal, leads to a central section of snow and rock, before finishing up ramps of snow, ice and mixed terrain. The trio required two bivouacs and three days overall to establish their Pilar Dudh Khunda. 1400m long, it breaches difficulties up to VI/6a, AI4, M4. The descent was initially carried out along the North Ridge, before heading down via a series of abseils onto the glacier below. Base Camp was reached late in the evening on 31 October.

After resting for a day the Catalans slowly ascend the glacier once again towards the base of Numbur. At 4:00 am on 4 November Baro and Padros began climbing up the south face; the idea was to climb the 1100m that separated their tent from the summit in a single day but towards 14:30 and at circa 6900, they decided to retreat due to poor snow conditions. Abseiling down the line of ascent, in less than three hours they returned to their tent. The attempt has been called Nepali Sun and the 1000m line has been graded VI/ 5, M4.