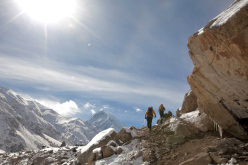 Simone Moro from Italy, David Göttler from Germany and the Poles Tomek Mackiewicz and Pawel Dunaj have set off on their second attempt to reach the summit of Nanga Parbat in winter.

As reported last week Simone Moro, David Göttler, Tomek Mackiewicz and Pawel Dunaj set off on their first attempt to reach the summit of Nanga Parbat. This turned out to be a "false" start, blocked at the outset due to the strong winds and intense cold that hindered the alpinists from climbing above Camp 2. But the attempt certainly wasn't wasted: after lots of hard work they managed to free the fixed ropes, buried deep in the fresh snow on a crux section of the Schell route.

Now though, after having returned to base camp and rested for a couple of days, the news has just come in of another weather window. Five or six days will be needed for the ascent to the summit and safe return and although this forecast is far from perfect, it is nevertheless a "possibility" as Emilio Previtali explains. On Facebook Previtali was jokingly compared to Michael Collins, the astronaut, "who remained in orbit around the moon while waiting for Neil Armstrong and Buzz Aldrin to put their Moon Boots on our satellite." We like this comparison because what took place in 1969 was a superb moment in history, absolutely unique and unrepeatable. Like - with the due proportions - what is taking place on Nanga Parbat. The nude mountain that has still never been climbed in winter.