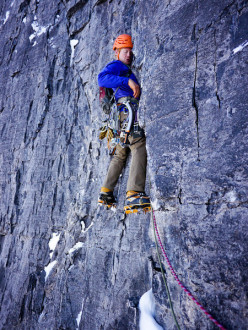 A brief stretch of gloves-off crimping high on the headwall.
Photo by Josh Lavigne 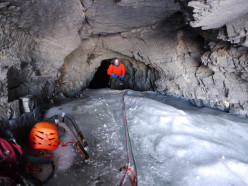 At the entrance to the amazing cave.
Photo by Josh Lavigne

In early September Jason Kruk and Josh Lavigne climbed the North Face of Mt Alberta. In doing so they repeated the House - Anderson route to circa 3/4 height and then continued up new terrain (WI5, M7+++, 1000m, 06-09/09/2012). During the climb they discovered a magnificent, enormous cave.

Jason Kruk and Josh Lavigne have recently made a rare ascent of one of Canada's most coveted and striking features, the awesome North Face of Mt Alberta. Ascending alpine style, Kruk and Lavigne "climbed through everything: supportive, boot-top powder; névé; hard, old ice; fresh blue stuff" past snow-covered "supremely chossy stone" to reach the headwall proper, following the 2008 line chosen by Steve House and Vince Anderson to the incredible WI5+ pillar halfway up the face.

Commenting on his blog, Kruk described this WI5 ice feature as stellar and added "Josh and I have both climbed a lot of this stuff, and ranked this ice feature very near the top of the list of all time classic ice."

After a short stretch of mixed, Kruk mantled onto a ledge and much to his surprise discovered a cave which might well turn out to be a key element of this face. Despite having time on their side for a few further pitches, they were curious about this opening and opted to spend the night here in order to be fresh for the difficulties above. "We poked our heads inside the cave and a large room appeared" explained Kruk. Much more than a room though, as the duo ventured deep into Mt Alberta for circa 20 minutes before turning back.

After a comfortable night the two proceeded early the next morning; instead of traversing off left to easier ground as Anderson and House had done, they continued directly up the intensely exposed headwall, past 4 hard drytooling pitches and one easier but very runout final pitch. "I'd guess about 7 or 8 pitches were solid M7 with a couple I'd give M7+++." according to Kruk. After summiting they descended down the Japanese Route and after a further bivy on Mt. Alberta's eastern flanks they finally reached the hut.

The cave is an interesting and important revelation "A horizontal oasis in a vertical desert" as Kruk puts it, and this latest Kruk - Lavigne climb is certain to cause a stir. For the interesting full report, check out the Kruk's ascent blog on: http://blog.jasonkruk.net