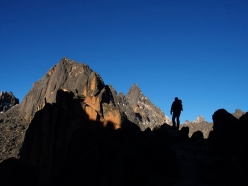 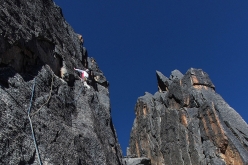 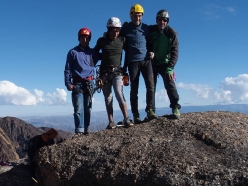 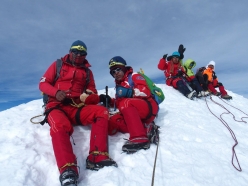 Enrico Rosso reports about the June 2017 expedition he led to the Cordillera de Quimsa Cruz massif in Bolivia, where the rock climb 'Kamasa' (250m, 6b, A2) was added to the North Face of Gran Muralla (5200m).

I set off from Italy with Marco Rainone and Giovanni Penna with two goals: to work with "Università Campesina" and to attempt a new route up the South Face of Ilimani.

Università Campesina is a project run by my friend Antonio Zavattarelli, a priest and mountaineer, nicknamed Topio. Through his Missionary at Penas, Topio is currently training some Bolivian high school pupils to become tour guides. The best may even progress and become mountain guides.

During the first part our stay we worked for the Università Campesina project; a series of lessons in the classroom and at the crags close to Penas, after which we then completed the program by climbing Nevado Chachacomani (6064 m) and Nevado Condoriri (5648 m).

When the school holidays arrived the Bolivian children returned to their families and we began considering the final stage of the expedition together with Topio and some children from the Missionary, namely Davide Vitali, Rosmel Varillas Acuna and Ronaldo Choque Camargo (Aski).

The abundant snowfall and the unstable weather in May, coupled with high winds, had created unstable conditions on the upper slopes of the mountains and as a result of the high risk of avalanches we decided to change plans and opted for the "rocky" Cordillera Quimsa Cruz. Quimsa Cruz is an eldorado for rock climbing in the Bolivian Andes; still relatively unknown, it is marked by magnificent granite peaks and a huge potential for new routes.

On 18 June we departed for the small town Viloco. Our group was comprised of Marco Rainone, Antonio (Topio) Zavatarelli, Davide Vitali, Rosmel Varillas Acuna, Ronaldo Choque Camargo (Aski) and myself.

After having established base camp at 4500m in the Kuchu Mocoya valley we spent the first day doing a reconnaissance and choosing an objective, eventually settling for the North Face of Gran Muralla (5200m).

About 250m high, this can be described as a high altitude cliff and it is certainly one of the most beautiful rock formations in the cordillera. We started our climb on the second day, focusing on a series of cracks on the righthand side of the North Face. We completed the climb in 8 hours using mostly friends, nuts and some pegs. The granite rock proved to be of excellent quality: rough and sharp, although it has to be said that the cracks were often filled with earth, grass and stones that slowed progress.

We called the route "Kamasa", which means courage in the local Aimara language. The route is 250m high with difficulties up to 6b and A2. As a result of a fall Davide Vitali twisted his ankle and was forced to abandon the ascent. He retreated to base camp accompanied by Antonio Zavatarelli. For all the rest of the group the climb proved a success.

The final outcome of the expedition was very positive therefore, especially bearing in mind the cooperation with the "Università Campesina" project which offers a bright future of qualifications and work for the younger generations on the Bolivian plateau.

27.04.2016
Bolivian Cholitas climb the Andes to conquer emancipation
A group of Bolivian women is currently attempting to to climb eight mountains over 6000m in the Andes. Aged up to 50 and wearing their traditional dress, for years they have worked as cooks or porters for trekking and mountaineering expeditions.