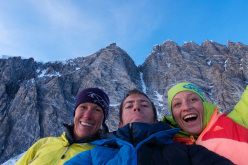 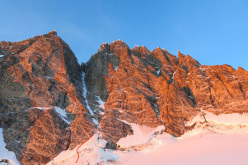 On 18 and 19 August 2015 Paul McSorley, Mayan Smith-Gobat and Ines Papert made the first ascent of South West Buttress of Mt. Waddington's NW Summit.

An international trio comprised of Ines Papert from Germany, Paul McSorley from Canada, Mayan Smith-Gobat from New Zealand and has made the first ascent of the 800m high SW Buttress of Mt. Waddington's NW Summit in British Columbia, Canada.

"We summited on the 18th at around 7 pm, had a bivi on the descent via the Angel Glacier and arrived our BC in the morning of the 19th. That same evening we got the ride back by helicopter to Bluff Lake." explained Papert, who added "This route had nearly been completed in September of 2011 by our friends Tony Richardson and Jason Kruk who approached by powerboat, raft and foot from Twist Lake over the course of a week. They came within two pitches of the summit ridge before bailing in the face of dangerously deteriorating rime ice."

It is worth noting that while McSorley and Papert have a strong track record in alpine climbing, Smith-Gobat is known above all for her hard sports climbing and multi-pitch rock climbs, in Yosemite but also in the Dolomites. On FB the Kiwi climber commented that this experience had been "an amazing reintroduction to the Alpine environment…"