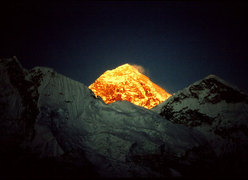 Simone Moro and Denis Urubku reach the summit of Everest

In our last news we reported on Simone Moro and Denis Urubku who, after having climbed to Everest's South Col to acclimatise, were resting in Dingboche before setting off for the unclimbed Everest-Lhotse Traverse.

In the morning of 24 May the two reached the summit of Everest, but after descending to the South Col they decided to abandon their attempt of the traverse.

Simone Moro had fallen ill at Camp IV on the 23rd. He offered to pay for oxygen belonging to Rob Link's Expedition 8000/Mountain Link, but he refused the money and gave Moro two bottles. Link's gesture should be highlighted seeing that relationships between mountaineers in the death zone give rise to so much discussion.

The next day Moro and Urubku, who did not use oxygen, continued to the summit and then descended unhindered to the South Col. They had intended to continue on to Lhotse. Snow conditions made this unfeasible, and so the two abandoned their attempt and returned to Base Camp.

Moro's expedition had been plagued by misfortune from the outset. At Everest Base Camp some of his belongings were stolen and on his return from Dingboche a leg injury jeopardised the expedition before it got fully under way.

Although just one rest day seemed enough, in the end no one can say how much this injury affected Moro. Ill health on the South Col added to his list of problems and he therefore decided to use supplementary oxygen. Despite the outcome, Moro once again has demonstrated his stubbornness for which he is renowned.