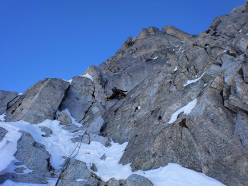 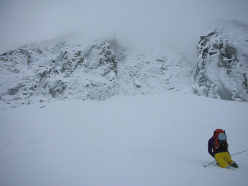 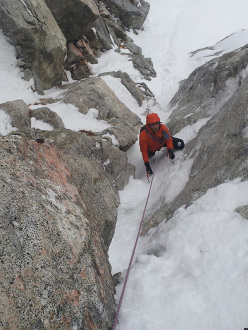 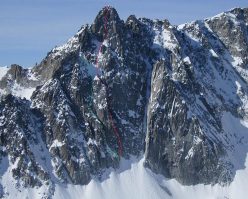 Claudio Migliorini talks about the first ascent of two mixed climbs on Monte Nero di Presanella (Adamello - Presanella massif, Italy) carried out in 2013, Rolling Stones and Una via per te fatta in tre, as well as the first repeat of Wind of Change.

After the short report of Clean Climb, the new mixed route put up by Giovanni Ghezzi and Demis Lorenzi, out brief panorama of this corner of the Adamello - Presanella massif continues with Claudio Migliorini taking a step back in time to remember the first repeat of Wind of Change (380m M6+ WI5) just a few days after it had been first ascended by Patrick Ghezzi and Giulia Venturelli, before taking us through the first ascents of Rolling Stones (550m M6+ WI4+, with Andrea Reboldi) and Una via per te fatta in tre (250m M4 WI4, with Andrea Reboldi and Serafino Moretti), both established in November 2013.

Early December 2011, a stunning day of high pressure, the sky is limpid, conditions up high are certainly outstanding and… if something can go wrong on a day like this, surely it will! lo and behold someone cancels their plans right at the last minute and I find myself alone at Pinzolo, racking my brains about what to do next. The fall-back, so to speak, could be a quick trip up Couloir dell’H that I’ve already climbed up. When I reach the Segantini bivouac I glance at the new routes book and discover that a new route has been added just a few days earlier. I call Patrick for some info, ring Cristiano to see if he’s free, and in a brace of shakes all is set for the next day: Wind of Change!

Classic early morning rise from home, but it’s going to be well worth the effort: beautiful views across the Brenta Dolomites at dawn are followed by a clear day above a sea of clouds in good company. The route really is very beautiful indeed, both complete and demanding: rock and mixed climbing leads to a small ledge on the left and then, around the corner, a beautiful corner rises sharply upwards. This is followed by another, with a thin sliver of ice. The climbing almost moves you to tears and you wish it would never end! A couple of slab, snow and mixed terrain then lead to the easy finishing slope and the col. Well done Patrick and Giulia!

Beginning of November 2013, we really want to “scrape” some rock with our ice axes and we don’t want to miss out on the usual early season appointment with Monte Nero’s granite and ice. At this time of year conditions are often favorable and Andrea, after reccie, casts the bait and I swallow hook, line, and sinker.

So after a pleasant evening at the bivouac and an equally pleasant approach, we start up Rolling Stones. There’s a fair bit of snow plastered to the face and we’ve got our hands full cleaning it all, but that’s what we’re here for! It’s overcast, at times it sleets for a bit creating "Scottish style" conditions and a great atmosphere.

Andrea with Alessia had previously attempted the line back in November 2006: at the time they started up what they believed was a new route, but after 50 metres they stumbled across a belay and some tat and so their drive to put up something new ebbed a little. "But since we’re here, we may as well give it a proper shot..." and after having used all the tricks in the books to get past a thin sliver of ice on pitch 1, they felt it really would be a shame to abseil off. They continued, pitch two proved even worse, up thinner, at times nonexistent ice. Climbing past steep rock they reached a thin drip that lead them to the base of another gully where they established a belay. Pitch 3 was somewhat easier, up a gully to beneath the final huge step, the long, vertical one: unfortunately they abandoned their attempt due to the poor ice on a 10 metre section. The first attempt of this line probably goes back to the 1990s by Care' & C; considering the intense activity by local climbers there may well have been other attempts on the first pitches but, from what we have managed to gather, none reached the summit.

After having retraced these pitches we emerged onto the small plateau at about three quarters height, then followed a gully to reach the col on the right. From here the summit looks close but snow plastering the slabs and cracks slows progress. The overhanging ridge that looms above our heads is impressive to say the least and after climbing immediately below it, a final demanding corner brings us to the top. We shake hands, take the usual summit photos and head off down into the mist. No panorama today.

A few days pass by and then we return: this time we’re joined by Serafino as we wake up early and ascend all the way from down in the valley. Once again we’re eager to find something new and we reckon we stand a chance of finding something on the sunny south face. The route, which ends on the summit, is shorter than those on the north face, not too difficult but with some sections that are more demanding. We had a whale of a time: one climbing up front (it's a tough job but someone’s gotta do it!) and the other two at the belay keeping spirits high. Superb!

Safe climbing to all!
Claudio Migliorini

Thanks to Modi & Toni

TOPO: Una via fatta per te in tre, Monte Nero