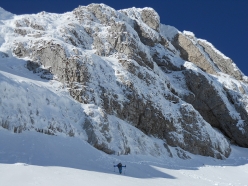 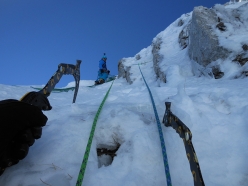 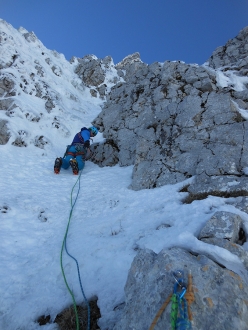 Yes, I admit, it’s a illness. That thought in the back of your head that, every now and then leads you to first ascend a new route. Infinite dreams came about because of one of those persistent thoughts, ever since Fabio, Gabriele and I added the variation to The Thin ice up on Monte Miletto. At the time we carefully observed that line, plastered with ice at the start but then thinner and thinner up high. Perhaps rightly we decided that it was the wrong day to give it a go and so we opted to add the variation Comunque andare.

"Are you free on Wednesday?", "Yes ... what d’you want to do," replied Agnese, now almost a year down the line. Dreams don’t just fade away, they continue to live in the back of our slightly sick minds. My dream had slumbered and was suddenly reignited when I saw the route from the chairlift at Campitello Matese. And that's how Agnese and I ended up approaching the North Face of Monte Miletto the next morning.

It was a clear day, sunny, just the right temperatures for some winter mountaineering. Agnese has known me for many a year, but didn’t know what I wanted to climb... I pointed out the line from a distance, she replied that walking sticks might have been useful. Ok, if her first reaction was walking sticks, it meant she wasn’t intimidated... We focused on preparing the gear, she’d help carry the drill. Oops ... yes, I said "drill", that unpleasant word for some. Perhaps having two bolts at the belay is acceptable if you’re a stone’s throw from a (horrible) 1980’s residential block. Or, looking at things from a different point of view: it’s a well-known fact that the pitches in the Matese massif are hard to protect, that you often need to invent bizarre contraptions that offer little more that psychological support. This view is shared by all the most active new routers here. Last but not least, I think it's only fair to safeguard the life of the second as much as possible. For all these reasons I try, wherever possible, to equip the belays of my routes with bolts.

Hence this line, on which we left no gear in-situ along the pitches, two of which require great skill at placing gear. What remains is a demanding outing and a stupendous climbing if the conditions are similar to the ones we had. It’s too easy to speak highly about your own routes. But it those who repeated the route shortly afterwards (Gabriele Paolucci and Marco Amodei on 20/02/201) are enthusiastic, then it’s easy to understand why I have not only a sense of belonging about this line, but also the sensation of having experienced an Infinite Dream.

Thanks to Climbing Technology and the shop“Alta quota” at Isernia for their support.