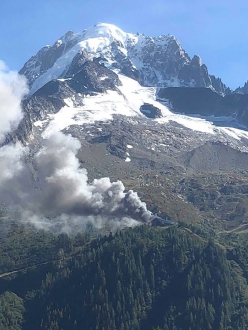 The Grands Montets cable car middle station caught fire yesterday afternoon. While no one was injured, the fire has caused significant damages.

After unexpected maintenance forced the Aiguille du Midi cable car to close twice this year, the streak of bad luck that has plagued the cable cars on the French side of Mont Blanc continued yesterday when a fire broke out at circa 13:30 at the Lognan mid-station of the Les Grands Montets lift.

Fortunately no one was injured as the cable car was closed due to routine maintenance and before the 60 fire fighters arrived the workers were airlifted to safety. The mid-station has sustained serious damage though and five of the eight cables melted as a result of the high temperatures, causing a cabin to crash to the ground.

La Chamoniarde, the Chamonix-based mountain rescue society, informs that it is strictly forbidden to enter the area below the cables of the Argentière - Lognan cable car as the cable might collapse in the near future.

The Les Grands Montets cable car starts at the small village of Argentière and leads to the middle station Lognan (1972 m) before continuing to the Grands Montets mountain station at 3275m. The cable car is used by skiers, but also by alpinists to access Aiguille Verte, Les Drus, Les Droits and all the other mountains above the Argentière Glacier.