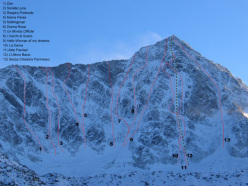 This is the second time I'm alone on the summit of Adamello after having climbed a new route up its beautiful north face. Perhaps it's only chance, perhaps not, but the fact of the matter is that I'm on the top precisely 25 years after that first time. With a lot less strength than a quarter of a century ago, but with the same unbridled love for this magical corner of the world.

I've always dreamt about this line but for one reason or other I kept putting it off to a later date. With our route Aldo Parolari we'd explored the face a bit, and the first third of La Dama had more or less retraced my variations climbed in 2012 before joining Parolari on the upper section and exiting up Hello Women, but all routes had left the most tricky section of this north face practically untouched.

So during this strange winter, where approaches are facilitated by the lack of snow, I gave myself this beautiful present. On 08/12/2015, after having climbed the first part up to the snowfield in 2012, I finally completed L'Ultimo Bacio, the Last kiss, a route which is never boring, as straight as an arrow, following a beautiful line up an amazing mountain, never overcrowded and seemingly made for mixed climbs. At present there are 13 routes on Adamello's North Face, one better than the other, in a superb ambient, far removed from the hustle and bustle and extremely adventurous.