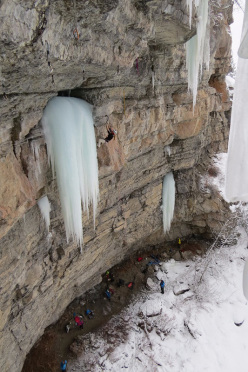 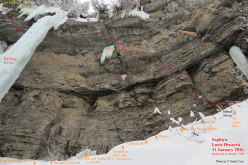 The route line of Saphira, The Fang Amphitheater, Vail, Colorado, USA, freed by Lucie Hrozova on 31/01/2016.
Photo by Jacek Czyz

On 31 January 2016 Lucie Hrozová made the first ascent of Saphira, a mixed climb graded M15- at the The Fang Amphitheater in Vail, Colorado, USA.

At the end of January Lucie Hrozová took part in the Ouray ice climbing festival, the famous American meeting which the Czech ice climber won and placed 3rd in the overall male and female ranking. After this she immediately travelled to the Fang Amphitheater in Vail where she completed the first ascent of a project which is now a contender for one of the hardest mixed routes in the world. The climb is called Saphira, crosses the famous Mustang (previously the hardest climb of this genre in the States), and was bolted by Standa Vrba two years ago. Hrozová, who trained specifically with ice axes 9 months of the year and now works in a climbing gym in Prague, believes Saphira to beharder than all her previous M14’s, and also significantly harder than the M14+ Ironman she climbed in 2013. Hence her suggested grade M15- . The current non-plus-ultra of routes of this sort. As usual, awaiting confirmation.

Saphira, the mythical dragon of the Eragon saga… her den is now in Vail, Colorado. She comes to life with the oncoming freeze and reaches a respectable 55 meters in height!

Standa Stenley Vrba discovered and bolted this line two years ago. Standa is a Czech native and excellent alpinist who has been living in the USA for 17 years. He has numerous hard ascents to his name, and I’ve always been very impressed by his climbs.

I was so impressed with the Saphira that it was the first thing I wanted to conquer when I got to Vail. Saphira leads logically between rock and icy sections and is characterized by the variety of its climbing: steep, technical moves lead to a long, powerful upper section before finishing up Jeff Lowe’s legendary Octopussy icicle.

Saphira also crosses the M14 Mustang on the upper section and, in retrospect, perhaps it’s a shame I didn’t attempt Mustang first, as when I got round to trying it after having attempted Saphira I sent in on my first attempt. While climbing Mustang though I injured my middle finger, it turned purple and doubled in size, but fortunately it was nothing serious and after a few days off it got better and I returned to the base of the incredible Saphira.

I was worried as I began climbing, because Saphira had never been climbed before. On the one hand American climbers had attempted it for the last two years, but without the success. On the other hand, it was a great challenge and Standa provided me with a lot of courage.

Since I cannot fly like a mythical dragon, the climb up was a big battle, but in the end I managed to conquer it. Apart from trembling legs, nervousness as well as fear due to the long run-outs, I also faced frost like in Alaska. I cannot complain however because Standa, who belayed me in the cold for 50 minutes straight, and Jack, who filmed me while hanging above the Fang, had it much colder than me.

I am very grateful and thankful to Standa, his wife Magda, Jack and my father for their tremendous support in Colorado. I owe much of my success to them. I would also like to thank my sponsors, the magazine Lidé a hory (People and Mountains), Singing Rock and Asolo.