► News ► Alpinism ► Leichtfried and Purner do the Moonwalk, the longest icefall in Austria
Versione italiana 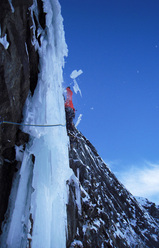 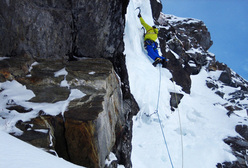 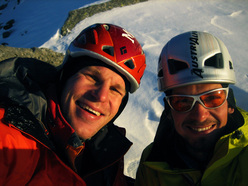 PORTFOLIO / gallery Portfolio: Leichtfried and Purner do the Moonwalk, the longest icefall in Austria

Leichtfried and Purner do the Moonwalk, the longest icefall in Austria

Albert Leichtfried and Benedikt Purner have carried out the first ascent Moonwalk WI6/M7, at 1000m the longest icefall in Austria.

It's a known fact that some icefalls are more fickle than others. They come into condition rarely, if ever, and when they do they need to be climbed at that precise moment to absolute perfection. A drip which fits this description is Moonwalk high in Austria's Zillertal Alps, first climbed by Albert Leichtfried and Benedikt Purner at the start of December, which at 1000m in length is now Austria's longest icefall.

The two skinned in by night, climbed the drip with difficulties up to WI6/M7 and then descended by the light of the moon. Leichtfried describes the route as “a combination of classic north face climbing with serious waterfall and mixed climbing. I still can't believe we did it, a big dream of mine has come true! His report is below.


Moonwalk by Albert Leichtfried
“High in the Zillertal Alps the source of a little runnel is located somewhere close to the ridge between the mountains Hohe Warte (2943m) and Sagwand (3227m). This works its way all the way down through the entire North Face and ends at the bottom of the Alterertal valley. When conditions are right, this runnel freezes into a continuous 900m ice line, and once in a blue moon the drip grows without too much fresh snow. This is just the right moment for an ascent. Benni and I had checked conditions in the inner Valsertal regularly since last November, which meant that it took more than a year for the right moment to come about. But for such a route, this isn't really a long time to wait. We started to realise our project on 3rd of December 2009 by moonshine. After 8 hours of non-stop climbing and 14 hours in total we returned home, happy and, once again, by the light of the moon.”

Moonwalk
Ridge between Hohe Warte and Sagwand, Zillertal Alps, Austria
First ascent: Albert Leichtfried & Benedikt Purner 03/12/2009
Grade: WI6/M7
Description: a combination of classic north face climbing with serious waterfall and mixed climbing
Gear: Cams 0,4-2, set of C3s, pegs, Spectre Ice Pitons, minimum 4 short screws, full ice rack
Approach: From Innsbruck take the A13 towards Italy, exit at Matrei / Brenner and follow signs to Vals. At the end of the valley park at the Gasthof Touristenrast. The route starts on the right-hand side of the valley and is reached by skinning in with skis in about 2 hours.
Descent: Abseil down the route. V-threads were used as well as 4 bolts.
Notes: Due to the length of the route, approach and descend by night is obligatory. The route has to be done with a highly stabile snow conditons!
- Google Earth Marker