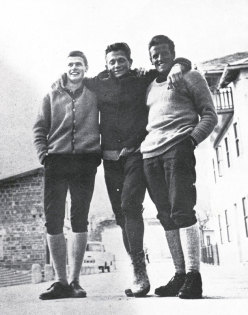 R. Messner, S. Mayerl and H. Messner after the first winter ascent of North face of Monte Agnèr in 1968.
Photo by 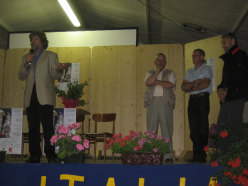 R. Messner, B. Pellegrinon, Heinl Messner and Sepp-Mayerl in Val di San Lucano to celebrate the 40th anniversary of the first winter ascent on 6/07/2008.
Photo by

On Saturday 27 July 2012 Jospeh Mayerl, the legendary alpinist from Tyrol, Austria, died aged 75 which climbing in the Lienzer Dolomites.

Reinhold Messner considered him his mentor and affirmed that in all likelihood he would not have survived the extreme situations had it not been for Mayerl influence: "Sepp Mayerl was one of the few alpinists capable of climbing on all types of terrain. He isn't a specialist, he can climb just as well on ice as on rock and he has acquired this ability step by step, gained from years of experience."

In the Italian Dolomites a famous series of yellow corners running up Sass della Crusc are named after him, while the heart of the NW Face of Monte Civetta is breached by his Via degli Amici. A direct line climbs straight up the North Face of Sassolungo, a face which is a thousand vertical metres high. The first winter ascents of Monte Agner's North Face and arete were carried out by him, two never-ending journeys reminiscent of something truly epic. And then there were the expeditions to the Greater Ranges, the 1970 first ascent of Lhotse Shar, minor summit in the Nepal's Lhotse range. Sepp Mayerl certainly didn't just sit about twiddling his thumbs.

Mayerl was known above all as “Blasl-Sepp”, a name which took after his family's nickname, and he was born in 1937 in Goriach in Eastern Tirol. The tragic accident occurred while climbing in his home mountains, the Lienz Dolomites, on Saturday 27 July 2012. For reasons as yet unknown Mayerl fell, aged 75, while climbing the Adlerwand close to Lavant on the border between East Tirol and Carinthia

When I met him, a fair few years ago, he told me, almost as if to justify himself: "As long as I can, I'll continue to climb..."